The Supreme Court on Wednesday ruled that a woman cannot accuse a man of rape alleging that he promised to marry her if she continues to have sex with him despite being unsure about marriage. 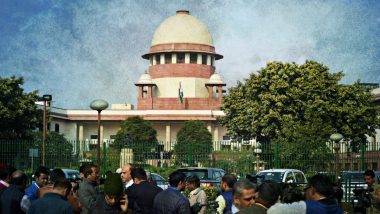 New Delhi, August 22: The Supreme Court on Wednesday ruled that a woman cannot accuse a man of rape alleging that he promised to marry her if she continues to have sex with him despite being unsure about marriage. The apex court also said that there is a difference between failing to keep a promise and making a fake promise altogether. Every breach of promise to marry cannot be a false promise, the top court said.

"The promise of marriage must have been a false promise, made in bad faith and with no intention of being adhered to at the time when it was made. The false promise itself must be of immediate relevance, or bear a direct nexus to the woman’s decision to engage in the sexual act," a bench of Justice DY Chandrachud and Justice Indira Banerjee said. A man can be convicted of rape if it is established that he had sexual intercourse with a woman on the pretext of a false promise of marriage. Rape and Sexual Assault Victims’ Names, Identities Not to Be Disclosed: Supreme Court.

"On the other hand, a breach of a promise cannot be said to be a false promise. To establish a false promise, the maker of the promise should have had no intention of upholding his word at the time of giving it," the top court said. The verdict came in a case related to an Assistant Commissioner of Sales Tax who accused a Deputy Commandant in the CRPF of rape. The CRPF man had moved the Supreme Court to get the rape FIR against him quashed.

(The above story first appeared on LatestLY on Aug 22, 2019 08:52 AM IST. For more news and updates on politics, world, sports, entertainment and lifestyle, log on to our website latestly.com).