Congress leader Rahul Gandhi on Thursday expressed his condolences on the demise of West Bengal Pradesh Congress Committee (PCC) chief Somen Mitra. The 78-year-old politician breathed his last at 1.30 am on July 30 following a cardiac arrest. 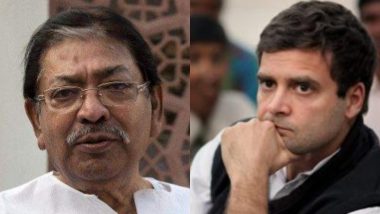 Expressing his condolences, Rahul Gandhi took to Twitter and wrote, "All my love and support to family and friends of Somen Mitra at this difficult time. We will remember him with love, fondness and respect." Somen Mitra, West Bengal Congress President, Dies at 78 Due to Cardiac Arrest.

All my love and support to family and friends of Somen Mitra at this difficult time. We will remember him with love, fondness and respect. pic.twitter.com/k1muPvycgT

Earlier on Thursday morning, West Bengal Youth Congress confirmed reports of Mitra's demise. The Youth Congress took to Twitter and wrote, "WBPCC President Somen Mitra has breathed his last, a short while ago. As we struggle to come to terms with this immense loss, all our prayers and thoughts are with Dada’s family. May his soul rest in peace Folded hands (sic)."

According to news agency PTI, the West Bengal Congress leader was admitted to a hospital in Kolkata in June with kidney and heart ailments. He died on Thursday at 1.30 am. COVID-19 test was also conducted, but his samples had returned negative. Meanwhile, Mitra's family members are yet to issue an official statement about his demise's circumstances.

(The above story first appeared on LatestLY on Jul 30, 2020 08:33 AM IST. For more news and updates on politics, world, sports, entertainment and lifestyle, log on to our website latestly.com).