Supporters of Swami Krushnaswarup Dasji of Swaminarayan Bhuj Mandir on Wednesday took out a rally in support of him in Kutch after he faced criticism for his remark on menstruating women. 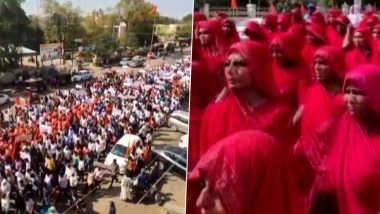 "If you eat food prepared by a menstruating woman even once then your next avatar will definitely be that of an ox," the spiritual leader said, adding "A menstruating woman who cooks food for her husband will certainly be reborn as a "kutri (bitch)." Bhuj College Girls Allegedly Forced to Remove Undergarments to Prove They Weren't Menstruating After Hostel Warden Reports Students Entered ‘Temple and Kitchen’.

Gujarat: Supporters of Krushnaswarup Dasji, took out a rally in his support in Kutch today after he faced criticism for his remark on menstruating women. pic.twitter.com/guT51jFKKF

Justifying his statement, Swami Krushnaswarup Dasji said that these are the rule outlined in "Shastras". He also said that men should learn to make food so that menstruation women don't break their dharma.

Earlier, 60 tribal girl students, living in a hostel of a college run by followers of Swaminarayan in Bhuj, were allegedly forced by college authorities to remove their undergarments to check if they weren't menstruating. After the incident came to light, the college Principal, hostel rector and peon were suspended.

(The above story first appeared on LatestLY on Feb 19, 2020 08:08 PM IST. For more news and updates on politics, world, sports, entertainment and lifestyle, log on to our website latestly.com).