The Idol Wing of the Tamil Nadu CID Crime Branch has seized three idols and 11 rare manuscripts from a shop in Chennai's Alawrpet area, police said. 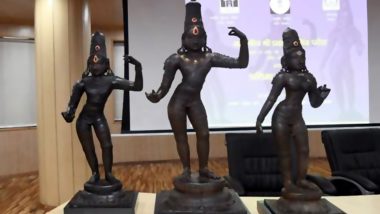 Chennai, February 19: The Idol Wing of the Tamil Nadu CID Crime Branch has seized three idols and 11 rare manuscripts from a shop in Chennai's Alawrpet area, police said.The period of the origin of these idols and ancient manuscripts with Buddhist inscriptions on them, have not been ascertained yet.

The Idol Wing conducted the raids on Friday evening on specific inputs and found them concealed in the basement of the shop. The owner, too, failed to provide valid information regarding their origin.

Archeological Survey of India (ASI) officials who inspected the idols, said that they dated back to the Chola period. An expert from the ASI, who verified the idols, said that except for one Nataraja idol, the other two carvings and manuscripts are of antique value and will fetch more than Rs 10 crore in the international market. Emerald Shiva Lingam Claimed To Be Worth Rs 5 Crore Seized From Tamil Nadu Native’s Bank Locker, Case Registered.

The Idol Wing has already passed on the photos of the seized idols to the Hindu religious and Charitable Endowments (HR&CE) department to find out whether they belonged to any temple under the department in the state.

(The above story first appeared on LatestLY on Feb 19, 2022 11:33 AM IST. For more news and updates on politics, world, sports, entertainment and lifestyle, log on to our website latestly.com).