In another incident of a sexual offence against minors, a 45-year-old man was arrested on Monday for allegedly sexually assaulting his four-year-old son at Kasarwadavli in Thane. 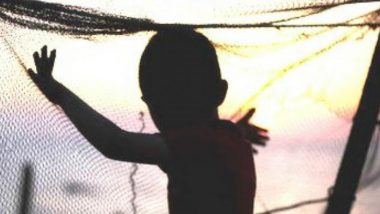 Thane, January 16: In another incident of a sexual offence against minors, a 45-year-old man was arrested on Monday for allegedly sexually assaulting his four-year-old son at Kasarwadavli in Thane. The man sexually assaulted his son for two years.  The accused was first caught by his wife, who had warned him against molesting the boy. But he threatened his wife to kill the child if she complained to anyone and continued molesting his son. Mumbai: 11-Year-Old Girl Raped And Sodomised by Tempo Driver While Returning From Garba Event.

According to a report published in Hindustan Times, when the accused’s son was two-years-old, his wife had caught her husband touching the boy’s private parts for the first time. The accused used to beat his son if he cried. A police official told the media house, “The accused continued molesting his son for over two years. He would threaten his wife of killing their son if she disclosed it to anyone.”

The boy’s mother approached the police on January 14 and lodged a complaint against her husband, and the accused was arrested on the same day. He was charged under various sections of the Indian Penal Code (IPC) and The Prevention of Children from Sexual Offences Act 2012 (POCSO).

Meanwhile, in November last year, A nine-year-old boy was allegedly sodomised and threatened by a man at Pinna village of Bihar's Muzaffarpur. The accused threatened the boy of dire consequences if he told anyone about it. According to a complaint, Praveen Kumar took the boy to a field in the village and allegedly sodomised him. The victim narrated the ordeal to his father upon returning home

(The above story first appeared on LatestLY on Jan 16, 2019 12:59 PM IST. For more news and updates on politics, world, sports, entertainment and lifestyle, log on to our website latestly.com).