A female constable, deployed with Dial 112 service of Uttar Pradesh Police, was found hanging in her rented house in the Dataganj area of Badaun district. 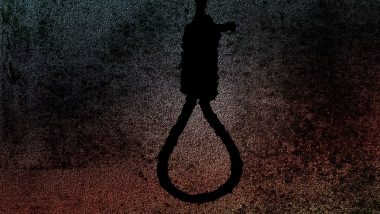 Badaun, Sep 17: A female constable, deployed with Dial 112 service of Uttar Pradesh Police, was found hanging in her rented house in the Dataganj area of Badaun district.

Identified as Shubhlata, 26, the constable lived with her brother, Anurag, and cousin, Kanchan. Her husband is in the Army and is posted in the border area.

Police suspect that Shubhlata took her life on Thursday when her cousin was in the washroom and brother had gone to school. Uttar Pradesh Shocker: 25-Year-Old Woman Attempts Suicide by Jumping in Ganga River After Alleged Rape by Traffic Police Constable.

Police are awaiting her autopsy report.

A resident of Raebareli district, Shubhlata was married to Deepak Kumar last year.

Her cousin Kanchan told police that everything was normal in the morning and Shubhlata told her that she had taken a day off. She even prepared breakfast for everyone.

She said that she had heard Shubhlata talking to her husband over the phone before she went to the washroom.

When she came out, she found Shubhlata hanging.

The constable was rushed to hospital, where the doctor declared her dead.

Badaun Senior Superintendent of Police Sankalp Sharma said, "Prima facie it appears that the woman constable has killed herself over a family dispute. We are investigating the case and will register an FIR if the family lodges a complaint."

(The above story first appeared on LatestLY on Sep 17, 2021 10:39 AM IST. For more news and updates on politics, world, sports, entertainment and lifestyle, log on to our website latestly.com).