In the video, Waseem Rizvi can be heard saying that his family members, including his wife and children, and the community had "abandoned" him. 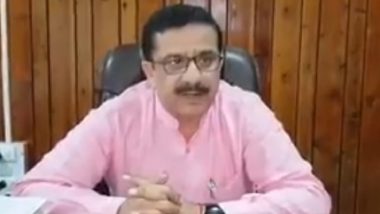 Lucknow, March 17: Former Uttar Pradesh Shia Central Waqf Board Chairman Waseem Rizvi, who is facing widespread condemnation for filing a PIL in the Supreme Court seeking removal of 26 verses from the Quran, has released a video from hiding, saying he won't stop. In the video, Waseem Rizvi can be heard saying that his family members, including his wife and children, and the community had "abandoned" him. Waseem Rizvi, Former Shia Waqf Leader, Faces Fury for His PIL Seeking Removal of 26 Verses From The Quran in Supreme Court.

"I don’t care. I am on the right path and will fight this battle till the last breath. I will commit suicide (sic) but will not give up," Rizvi is heard saying in the video. A Y-category protectee, Rizvi is in an undisclosed location. Both Sunni and Shia clerics have announced ostracism of Rizvi from the Muslim community. Prominent Shia cleric Maulana Kalbe Jawad has declared that Rizvi will not find a burial space in any graveyard of the country - a rare decision reserved for the likes of Pakistani terrorist Ajmal Kasab.

Last week, a group of people destroyed hayati qabr (grave), which Rizvi had booked for himself, in Lucknow’s Talkatora Karbala. Yesterday, the National Commission for Minorities (NCM) issued a notice to Rizvi for his statements against the Quran, asking him to tender an unconditional apology and to withdraw his comments within 21 days. Meanwhile, two police complaints have been filed against Rizvi in Muzaffarnagar.

Rizvi has reportedly approached the Supreme Court seeking deletion of 26 verses from the Quran for allegedly “teaching hatred, violence and terrorism". These verses were allegedly included in the Quran later in the period of the first three Caliphs, his petition stated.

(The above story first appeared on LatestLY on Mar 17, 2021 12:48 PM IST. For more news and updates on politics, world, sports, entertainment and lifestyle, log on to our website latestly.com).