Actor and philanthropist Sonu Sood took note of the internet connectivity issue in Wayanad and said he will send a team to install a mobile tower. 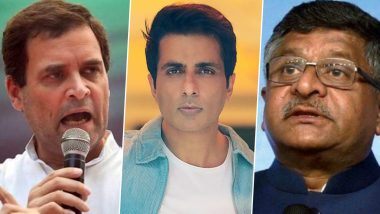 "The lack of internet coverage forces people to travel long distances, often by foot to use mobile internet. This has affected access to viral services, including e-learning tools for students, internet enabled public services and virtual marketplaces for farmers and small businesses," Rahul Gandhi, who represents Wayanad in Lok Sabha, stated in his letter to Ravi Shankar Prasad.

Asserting that access to internet is a basic human right, the Congress leader urged Prasad to intervene and "augment the existing network infrastructure". Actor and philanthropist Sonu Sood also took note of the issue and said he will send a team to install a mobile tower in Wayanad. "No one will miss their education. Tell everyone in Wayanad, Kerala that we are sending a team to get a mobile tower installed," Sood tweeted. Sonu Sood Launches ‘Sambhavam’ Initiative for IAS Students, Pledges Free Coaching Scholarships.

No one will miss their education.@Itsgopikrishnan tell everyone in Wayanad, Kerala that we are sending a team to get a mobile tower installed. @Karan_Gilhotra let's fasten our seat belts, time for another Mobile Tower. @SoodFoundation 🇮🇳 https://t.co/cqKQlbQZFU

The coronavirus pandemic has forced educational institute to go online. Since over 74 per cent of Wayanad's land is classified as a forest, internet connectivity remains a challenge for residents.

(The above story first appeared on LatestLY on Jun 29, 2021 04:31 PM IST. For more news and updates on politics, world, sports, entertainment and lifestyle, log on to our website latestly.com).