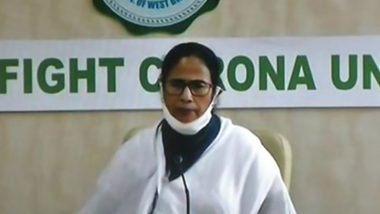 Kolkata, June 30: The West Bengal government on Tuesday announced extension of lockdown measures in containment zones till July 31, to contained the spread of coronavirus (COVID-19). In its order, the West Bengal government said educational institutes, swimming pools, gyms and other places drawing large gatherings will remain shut during the period. It also allowed certain relaxations in the non-containment zones. West Bengal Asks Centre Not to Schedule Flights From 6 Hotspot States, Wants Resumption of Kolkata Metro Services For Essential Workers.

During the lockdown, schools, colleges, cinema halls, swimming pools, gyms and entertainment parks will remain closed till July 31, said the West Bengal government. Social, political religious and other large congregation shall remain prohibited till July 31, it added. Earlier today, Chief Minister Mamata Banerjee said the state government is allowing people to step out for morning walk between 5:30 am and 8:30 am in West Bengal.

Banerjee also announced to increase the number of people who can attend a marriage ceremony and sraddha during the extended lockdown. "We are allowing morning walks from 5:30 am to 8:30 am, but social distancing should be maintained. Fifty people will be allowed at weddings and sraddha instead of 25," Banerjee told a press conference. Sraddha is a Hindu rite or ceremony performed on behalf of departed ancestors.

On a day Prime Minister Narendra Modi announced extension in free food grains to PMGKAY beneficiaries till November 2020, West Bengal Chief Minister Mamata Banerjee on Tuesday said her government would give free ration to people till June 2021. "We will give free ration till June 2021. The quality of ration is better than that of the Centre," the CM said minutes after Modi's address to the nation in the afternoon.

Last week, she had relaxed the night curfew hours during the extended COVID-19 lockdown across the state. From July 1 onwards, the night curfew hours will be from 10 pm to 5 am, instead of 9 pm to 5 am. West Bengal on Tuesday recorded the highest one-day spike in COVID-19 cases with 652 new infections, taking the state's tally to 18,559, while 15 more people succumbed to the disease raising the death toll to 668, a health bulletin said.

(The above story first appeared on LatestLY on Jun 30, 2020 08:26 PM IST. For more news and updates on politics, world, sports, entertainment and lifestyle, log on to our website latestly.com).