What Caused Devastating Rains in Uttarakhand, Kerala at This Time of Year?

As scary visuals of devastating floods causing damage to infrastructure in Uttarakhand steadily poured out of the state on social media, a most common question asked was, 'Is this happening because of climate change?' 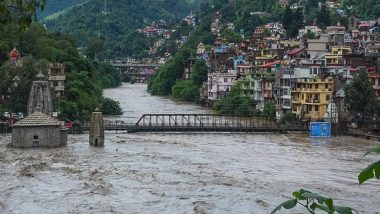 New Delhi, Oct 20: As scary visuals of devastating floods causing damage to infrastructure in Uttarakhand steadily poured out of the state on social media, a most common question asked was, 'Is this happening because of climate change?'

Over two dozen people lost their lives, several bridges were washed away, rail track near Kathgodam was upturned and twisted, houses at many places were swallowed by swollen rivers and landslides leading to roadblocks made life difficult for people of Uttarakhand, especially the Kumaon region on Monday and Tuesday when torrential rain pounded the Himalayas breaking several records for the season. Uttarakhand Rains: Heavy Rainfall Batters Several Parts, State Govt To Give Rs 4 Lakh to Kin of Those Killed in Rain-Related Incidents.

Prior to this, over the weekend, large parts of Kerala and some districts of Karnataka and Tamil Nadu had witnessed extremely heavy rainfall. There too, over two dozen people lost their lives due to flooding and landslides, and several residential areas suffered massive damages with houses along the riverbank washed away like a pack of cards. Kerala: High Alert on Banks of Periyar River, Water Reaches Flood-Prone in Ernakulam District.

The Intergovernmental Panel on Climate Change (IPCC's) Sixth Assessment Report of the Working Group I (AR6WGI) titled "Climate Change 2021: The Physical Science" released on August 9 this year has warned of increased variability in precipitation and with it, increased spells of heavy rainfall.

The India Meteorological Department (IMD) had issued warnings for both the states -- as it had for the eastern coast and Gangetic West Bengal, Bihar, and eastern Uttar Pradesh -- from relevant days ahead of what are termed as 'extreme weather events'.

As per IMD predictions, the extremely heavy rainfall in Uttarakhand on Monday and Tuesday was a result of interaction between a Western Disturbance and a low-pressure area over Madhya Pradesh. As per the IMD glossary, Western Disturbance (WD) is a storm that originates over the Mediterranean Sea, Caspian Sea and Black Sea and moves eastwards towards north India.

Frequency of Western Disturbances is maximum in the months of December and January, but throughout the year, there are WDs. "In monsoon season too, there is WD. In 2013, on June 16, it was an active WD like the current one. The low-pressure area was laying over Uttar Pradesh. Both interacted and it caused extremely heavy rainfall leading to the Kedarnath tragedy," recalled IMD Director General, Mrutyunjay Mahapatra.

However, Mahapatra refused to directly attribute the frequency of WD or the extreme weather event to climate change as he said, interaction between WDs and low-pressure areas led to this extreme weather episode, and this has happened earlier too.

"The frequency of heavy rainfall events is increasing due to climate change, especially in association with low pressure areas."

In the case of Kerala too, there have been debates about the impact of climate change. However, the nuanced analysis gives away two separate issues. One of extremely heavy rainfall and the other is the damage due to it. While the experts are divided over whether climate change is responsible for the rainfall quantum, that too in October, there is no debate whatsoever about the widespread destruction to property and infrastructure.

Every year since August 2018, when Kerala received once in a century rainfall, a debate on 'whether or not floods in Kerala are man-made?' has become common. The Gadgil Committee Report -- about leaving the Western Ghats untouched in certain areas, bringing in conservation efforts in some others and opening only a few for developmental activities -- has been put on the back burner by all six states, including Kerala.

The tropical forests, the mountain regions and the rain brought because of it makes the Western Ghats one of the 10 "biodiversity hotspots", meaning, harbouring a diversity of flora and fauna. The once-dense forest all over is now reduced substantially, but whatever remains not just soaks up large quantities of monsoon rainfall but also gives birth to 20-odd main rivers and scores of tributaries that flow both east-wards and west-wards nourishing the earth.

The Gadgil Committee had suggested classification according to usage and clearly identified the ecological dangers of allowing infra projects in ecologically sensitive zones. It had also recommended restrictions on mining and quarrying. All six states along the Western Ghats have refused to implement the recommendations in full.

Perhaps, the visual of a well-made, pucca house being swallowed by the river in Kerala is proof enough of what can happen if the states continue to neglect warnings, allow encroachment of rivers, forests chopped off or for that matter, mining continues.

Speaking about meteorology, as in the case of Uttarakhand, warnings about rainfall were given in Kerala too. Monsoon does not follow IMD's timetable of June 1 to September 30 and the withdrawal of monsoon is not yet complete. Plus, a low-pressure area on the Arabian Sea is not very unexpected.

To a question, 'If this much rain in October in Kerala is common or not?' a senior meteorologist from IMD Pune, K.S. Hosalikar curtly said, "It is not uncommon."

Low pressure areas in southeast Arabian Sea moved towards the coast of Kerala and Karnataka. This LPA does result in a lot of rain. And even when it was spread over several districts, it was actually a highly localised rainfall event in central Kerala and not widespread.

"There are two different stories for climate change -- one at the regional level and the other at the global scale. But what is important is that the experts have warned how climate change will have an unequal impact in a given area. Localised extreme weather events are a cause of worry," Hosalikar said.

Climate change or anthropogenic reasons, fact remains that the extreme weather events are set to rise. No one has disputed that.

(The above story first appeared on LatestLY on Oct 20, 2021 10:09 AM IST. For more news and updates on politics, world, sports, entertainment and lifestyle, log on to our website latestly.com).