Assembly Elections 2022 Results: Who Will be the CMs in Uttar Pradesh, Punjab, Uttarakhand, Manipur and Goa? 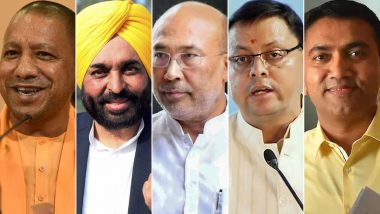 New Delhi, March 11: The results of Assembly Elections 2022 were declared on Thursday, March 10. The Bharatiya Janata Party (BJP) won Uttar Pradesh, Uttarakhand, Goa, and Manipur, whilst the Aam Aadmi Party (AAP) swept Punjab from the opposition. In all five states, voting was held in the months of February and March.

While the results are out, all eyes are now on who will be the chief ministers in the states that went to polls. While Yogi Adityanath will create history by returning as UP CM after completing his term, Punjab is set to see a fresh face, Bhagwant Mann as CM. Here's a list of CMs who will take over as the heads of these five states. Uttar Pradesh Election Results 2022: Yogi Adityanath Scripts History, Becomes First UP CM to Return for Second Term After Completing One Full Term.

Who will be the CM of Punjab?

Arvind Kejriwal's Aam Aadmi (AAP) party, which first appeared outside of Delhi, is the clear winner in the border state of Punjab. Incumbent Chief Minister Charanjit Singh Channi lost at Chamkaur Sahib and Bhadaur, while AAP ​​candidate Bhagwant Mann won an overwhelming victory in the Dhuri constituency with over 50,000 votes. Mann will take oath as the Chief Minister of Punjab. After AAP's Landslide Punjab Victory, Bhagwant Mann to Meet Arvind Kejriwal in Delhi Today.

Who will be the CM of Goa?

“The BJP will again form a government in Goa. We will take the Maharashtrawadi Gomantak (MGP) and independent candidates,” said Pramod Sawant, Goa Chief Minister on Thursday after BJP emerged as the single largest party in the state. The 48-year-old BJP leader won the Sanquelim constituency against  Dharmesh Saglani. CM Sawant won the seat with  47.2% of the vote and Saglani received 45.62% of the vote. Sawant is set to retain the post of Goa CM. Assembly Election Results 2022: BJP Triumphs in Uttar Pradesh, Uttarakhand, Goa And Manipur; AAP Decimates Congress in Punjab.

Who will be the CM of Manipur?

Who will be the CM of Uttar Pradesh?

Who will be the CM of Uttarakhand?

While the BJP won Uttarakhand Election, Bhuvan Kapri of Congress startled political specialists by beating Chief Minister Pushkar Singh Dhami on the Khatima seat on Thursday. Therefore, questions are being asked on whether Dhami will remain the CM or whether the BJP will announce a new Chief Minister in the state.

(The above story first appeared on LatestLY on Mar 11, 2022 02:54 PM IST. For more news and updates on politics, world, sports, entertainment and lifestyle, log on to our website latestly.com).