Finally after a month long campaign, the results of the Assembly elections to five states Uttar Pradesh, Punjab, Uttarakhand, Manipur and Goa are out. While the BJP retained the four states,Aam Aadmi Party got a massive mandate in Punjab 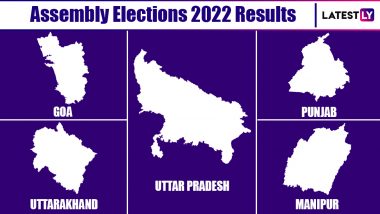 New Delhi, March 10: Finally after a month long campaign, the results of the Assembly elections to five states Uttar Pradesh, Punjab, Uttarakhand, Manipur and Goa are out. While the BJP retained the four states,Aam Aadmi Party got a massive mandate in Punjab.

With the BJP in power in four of the five states, the results hold national significance as they have the potential to shape a new political narrative. The results are also seen as a mid-term test for the BJP government at the Centre, which has been criticised for its handling of COVID-19, inflation and unemployment. In Punjab, the results can be seen an indicator of the fallout of the farmers’ protest and the ‘Badlaav’ vote completely shifting towards AAP.

With the win in Punjab, AAP has become the first regional party to have governments in two states while Yogi Adityanath became the first chief minister to return to power with full majority after serving a five year term.

Congress has been completely decimated with the party now in power in only two states of Chhattisgarh and Rajasthan. UP elections also indicate that the dalit support base of Mayawati has Completely collapsed with a major share of her voters now aligning themselves with the BJP.

Proving all exit polls wrong, the BJP managed to secure a comfortable majority in the 70 member Uttarakhand assembly winning 47 seats while the congress could secure only 19. Worse, the chief ministerial face of the grand old party, Harish Rawat also lost from his seat Lalkuan. But so did the incumbent chief Minister Pushkar Dhami. While the Congress party focused mainly on promises like "Char Dham Char Kaam" which included cheaper LPG cylinders, jobs, monetary help to poor families and better health facilities, BJP focused more on the face of PM Narendra Modi and on the claims of works done by the party in the last five years.

With the Aam Aadmi Party winning a massive mandate securing 92 seats in the 117 member assembly, it would be wise to think that the congress party self destruct itself. The central leadership could not control motormouth Sidhu even after it appointed Charanjit Singh Channi as the Chief Minister. It went to town tom-tomming the elevation of a Dalit leader as the CM, but could not capitalise on the brave move largely because of the powerful infighting. Bhagwant Mann Set to be Punjab CM; From Comedian ‘Jugnu’ to Punjab’s Next Chief Minister, Here is The Journey of the AAP Leader

The BJP managed to win 32 seats in the 60 member assembly thereby holding onto the northeastern state. The success of the party in the state can be attributed to its clear messaging and a number of initiatives like Go To Hills, Hill leaders Day, in a bid to smoothen the long standing gap between the Meitei-dominated hills and the tribal valley, which seemed to widen during Ibobi’s rule. While in 2017, the party won only one (out of 20) seats in the hills, there is a marked improvement in 2022.

With BJP nearly winning 260 seats in the electorally crucial state of Uttar Pradesh, it is advantage BJP ahead of the 2024 General Elections. The success of the party in the state can be attributed to factors like its projection of law and order in the state. Despite criticism of rights violation, the UP government was able to successfully project its crackdown on the mafia and the killing of criminals in police encounters as a sign of better law and order. Further, The free ration scheme of the Central and state governments was a gamechanger for the BJP as families struggled through a pandemic that led to the loss of lives and jobs. Uttar Pradesh Election Results 2022: Yogi Adityanath breaks 'Noida jinx' As BJP Retains Power; Here's What it Means

Despite farmers protest and covid mismanagement allegations on the BJP, Akhilesh Yadav was unable to defeat them.

The BJP has emerged as the single largest party with 20 assembly seats and is on its course to form the government.

The incumbent Chief Minister Pramod Sawant, who was earlier trailing, won his Sanquelim Assembly seat with a small margin of 600 votes, defeating Congress Dharmesh Saglani. Sawant, on Thursday, said the party will take support from Maharashtrawadi Gomantak Party (MGP) and independent candidates to form the government.

Meanwhile, Congress registered a win in 9 assembly seats and is leading on 2 seats. The Aam Aadmi Party managed to bag 2 seats, while Mamata Bnaerjee-led TMC displayed a flop show with no seats in hand.

(The above story first appeared on LatestLY on Mar 10, 2022 10:40 PM IST. For more news and updates on politics, world, sports, entertainment and lifestyle, log on to our website latestly.com).