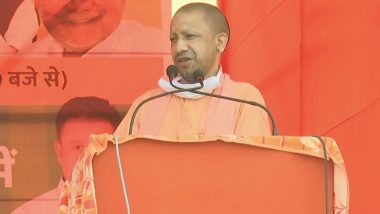 The UP CM said, "Bihar has a responsibility today. You have won the battle against Corona to some extent under the leadership of Nitish Kumar. But RJD & Congress want to leave CPI and CPI (M-L) amid you as a new Corona, this is no less than COVID19."

There can be no greater misfortune in Indian politics than RJD-Congress's support to those who are raising slogans in premier institutes of India, with intention of breaking the country into pieces. They intend to spread terrorism, naxalism, extremism and separatism again: UP CM https://t.co/6TEShM6Wti

Adityanath added that RJD-Congress are supporting those who raised slogans in premier institutes of India, with the intention of breaking the country into pieces. He stated, "They intend to spread terrorism, Naxalism, extremism and separatism again." Notably, Adityanath is one of the star campaigners of the Bharatiya Janata Party (BJP) for the upcoming elections in Bihar. Bihar Assembly Elections 2020: 31% Candidates in First Phase of Polls Face Criminal Cases, Says ADR Report.

The BJP and the Janata Dal-United (JDU) are contesting Bihar election in the alliance. As part of the seat-sharing pact, the JDU is contesting on 122 seats, out which the Nitish Kumar-led party will give seven seats to Jitan Ram Manjhi's Hindustani Awam Morcha (HAM). Similarly, the BJP allot seats to Vikassheel Insaan Party under their quota of 121.

In these elections, the RJD is contesting elections in alliance with the Congress and left parties. As per the agreement, the RJD will contest 144 seats, while the Congress party will fight on 70 seats. The RJD has given six seats to Vikas-sheel Insaan Party (VIP) and two seats to the Jharkhand Mukti Morcha (JMM). A total of 29 seats have been allocated to three Left parties—CPI-ML, CPI, CPM.

The election in Bihar will take place in three phases on October 28, November 3 and November 7. The results will be announced on November 10.

(The above story first appeared on LatestLY on Oct 21, 2020 04:38 PM IST. For more news and updates on politics, world, sports, entertainment and lifestyle, log on to our website latestly.com).