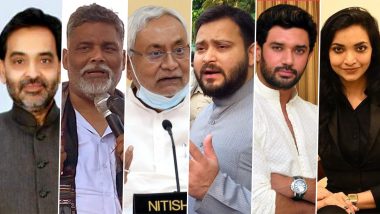 Patna, October 20:  Bihar Assembly Election 2020 has caused a stir in the politics of the state with many, once opposing parties, forming an alliance to contest the polls. This election is also seeing more probable chief ministerial faces in the fray. Five known and popular faces and one political debutante will be competing for the Chief Minister's office.

Many young leaders will be contesting against political veterans this election. With the coming in of Phuspam Priya Chaudhary, the Bihar Chief Ministerial race has become heterogeneous and more inclusive. Suryagarha Vidhan Sabha Seat in Bihar Assembly Elections 2020: Candidates, MLA, Schedule And Result Date.

Here is the list of probable CM candidates for Bihar Assembly Elections 2020:

The current CM of Bihar, Nitish Kumar is the chief ministerial face of NDA for the assembly election 2020. His party JD(U) is contesting the elections in alliance with the BJP. Kumar has served as Bihar CM six times previously and will be eyeing to take the oath for the seventh time as well. He has a long parliamentary career and has served the office of Agriculture and railway ministers at the centre. He was first elected to the Bihar assembly in 1985 and became the Chief Minister of Bihar for the first time in March 2000, however his term lasted for seven days only.

RJD's Tejashwi Yadav is the CM candidate of the Mahagathbandhan, an alliance of five political parties  -RJD, Congress, CPI, CPI(M) and CPI(Marxist-Leninist).  Yadav contested for the Assembly Election 2015 for the first time and won. He served as the deputy chief minister, while his party was in alliance with JD(U). After the split, he also served as the Leader of Opposition in the Bihar Assembly. He is still a newbie, however his father and veteran politician Lalu Prasad Yadav is a widely popular name in BIhar.

Pappu Yadav is the CM candidate of the Progressive Democratic Alliance. Azad Samaj Party, Social Democratic Party of India, Bahujan Mukti Party and Muslim Arakshan Morcha are the parties to the alliance, led by the Jan Adhikar Party.  Yadav was first, elected as an Independent MLA from Sinhareshwasra in 1990.He has served as an MP for five times and was elected as the best MP in the Lok Sabha in 2015. He formed the Jan Adhikar Party (Democratic) in the same year. Jamalpur Vidhan Sabha Seat in Bihar Assembly Elections 2020: Candidates, MLA, Schedule And Result Date.

Kushwaha is the CM face of the  Grand Democratic Secular Alliance.  It's a coalition consisting AIMIM, BSP,  Samajwadi Party Democratic and Democratic Party (Socialist) led by RLSP. He has a long political career spanning for 20 years. Kushwaha was first elected to the state assembly in 2000. He became the Minister of State for Human Resource Development in 2014. He has served as the deputy leader and the leader of opposition in the Bihar Legislative Assembly.

Pushpam Priya Chaudhary announced her candidature to the Bihar CM post as the face of Plurals Party, a party she herself formed in March 2020. It will her first stint in politics. Chaudhary's father Vinod Chaudhary had served as an MLC in Bihar.  According to her website, she has a Masters in Development Studies from the Institute of Development Studies at the University of Sussex and a Masters in Public Administration from the London School of Economics and Political Science.

Chirag Paswan
After the demise of Ram Vilas Paswan, LJP has declared party president Chirag Paswan as their CM candidate. He has been a member of Lok Sabha since 2014. Paswan claimed to have BJP's support in the Assembly elections, however, the latter denied his claims. He recently called himself Modi's "Hanuman."
This year's assembly elections in Bihar with varied candidates and alliances ensure big political-power struggles. The elections will be conducted in three phases between October 28 and November 3. The results will be declared on November 10.

(The above story first appeared on LatestLY on Oct 21, 2020 12:14 PM IST. For more news and updates on politics, world, sports, entertainment and lifestyle, log on to our website latestly.com).