state level working committee meeting of the Bharatiya Janata Party (BJP) on Sunday focused on strengthening the organization at the grassroots level while also supporting their party workers for the panchayat elections. 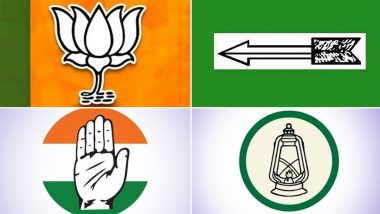 Patna, March 8: Many political parties in Bihar are now devising strategies to capture the maximum number of panchayats in the upcoming elections. They are working on ways to boost the chances of their party workers who are in the electoral fray for the panchayat elections.

The two-day state level working committee meeting of the Bharatiya Janata Party (BJP) on Sunday focused on strengthening the organization at the grassroots level while also supporting their party workers for the panchayat elections.

During the BJP meet, party state president Sanjay Jaiswal announced that eligible candidates will be supported by the party for the elections to the zilla parishads. PM Narendra Modi Addresses Rally at Brigade Parade Ground in Kolkata; Here Are The Key Takeaways.

A BJP leader says that all party workers at the grassroots level will be prepared before these local body elections. The party workers at all levels have been asked to fight the elections at different levels and work hard to win the maximum number of seats.

The Rashtriya Janata Dal (RJD) has also formulated a new strategy. According to an RJD leader, the party is soon going to issue formal instructions on how the cadres of the party should stand together in the electoral fray when they are contesting in the panchayat elections.

The RJD workers should not contest against each other so that the party can consolidate more and more seats. Budget Session of Parliament May Conclude Before First Phase of Polls on March 27, Say Sources.

RJD leaders claim that in the last panchayat elections, most of the panchayati raj institutions were under the control of the RJD. However, no official announcement has been made by the RJD in this matter yet.

RJD Spokesman Mrityunjay Tiwari says that the RJD's organizational structure is robust in Bihar. Panchayat elections in Bihar are not held on a party basis but party activists take part in these elections.

The panchayat elections in Bihar are likely to be held in April-May this year.

(The above story first appeared on LatestLY on Mar 08, 2021 05:52 PM IST. For more news and updates on politics, world, sports, entertainment and lifestyle, log on to our website latestly.com).