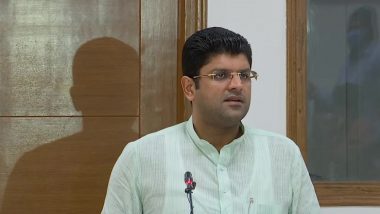 Chandigarh, September 20: Haryana Deputy Chief Minister Dushyant Chautala broke his silence on the raging controversy over the farm Bills introduced by the Narendra Modi government. The 32-year-old leader, drawing significant political support from the agrarian belt, said he would resign from his post the day the legislation poses any threat to the incumbent MSP regime. Agricultural Reform Bills: Rajya Sabha Passes 2 Farm Bills Amid Protests by Opposition Leaders And Farmers.

According to Chautala, the Centre cannot be blamed of diluting the MSP system as the legislations cleared by the Parliament make no mention about the minimum support prices. However, if the laws end up weakening the regime which guarantees the minimum support price to farmers, Chautala said he would immediately end the alliance with the Bharatiya Janata Party (BJP). Farm Bills: What Are The 3 Legislations Brought by Modi Government? Why Are Farmers Protesting? All You Need to Know.

"There is no mention of ending minimum support price system in the Agriculture Bills passed by Parliament. I will quit my post the day any danger to the MSP system is posed," said Chautala, whose Jannayak Janata Party (JJP) is ruling the state government in a coalition with the BJP. 'Bandh in Punjab and Haryana': BKU to Support September 25 Shutdown If Govt Doesn't Budge on Farm Bills.

There is no mention of ending minimum support price (MSP) system in the #AgricultureBills passed by Parliament. I will quit my post the day any danger to the MSP system is posed: Haryana Deputy Chief Minister Dushyant Chautala (file photo) pic.twitter.com/iUnP01nVwn

Ahead of Chautala's clarification, speculations were rife that he may storm out of the alliance with the BJP in Haryana. The Jannayak Janta Party continues to remain under pressure to sever ties with the saffron camp, especially after the exit of BJP's oldest ally Shiromani Akali Dal (SAD) from the Modi government.

The Akali Dal, which is a partner of the BJP since the 1980s, decided to resign from the NDA government at the Centre after the passage of farm Bills in the Lok Sabha. Party lawmaker Harsimrat Kaur Badal, who was the Union Minister for Food Processing, decided to quit from her position. The party is yet to take the final call on ending alliance with the BJP.

Two of the three controversial farm legislations - Farmers’ Produce Trade and Commerce (Promotion and Facilitation) Bill, 2020, and Farmers (Empowerment and Protection) Agreement on Price Assurance and Farm Services Bill, 2020 - were cleared by the Rajya Sabha on Sunday despite protests from the Opposition ranks.

The laws, if implemented, would allow the farmers to sell their produce directly to private players instead of mandatorily approaching buyers through the registered APMCs. The protesters have alleged a ploy to dismantle the system of MSP by weakening the APMCs and promoting private procurement.

(The above story first appeared on LatestLY on Sep 20, 2020 06:52 PM IST. For more news and updates on politics, world, sports, entertainment and lifestyle, log on to our website latestly.com).