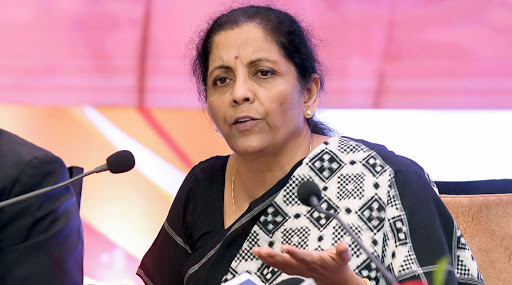 Chennai, January 19: Dubbing as "unconstitutional" the stand of some states that the CAA would not be implemented, Union Minister Nirmala Sitharaman on Sunday said all have the responsibility to ensure a law passed by parliament is enforced. Defending the Citizenship (Amendment) Act, she maintained there was no necessity to mix up the National Register of Citizens (NRC) and National Population Register with the CAA and appealed to those opposing the act not to make allegations that would lead to unrest among the public.

The Finance Minister also rejected allegations that the Narendra Modi government was selective in granting citizenship and said Pakistani singer Adnan Sami was among over 3,900 people who had been given citizenship in the last six years. Finance Minister Nirmala Sitharaman Says Air India and Bharat Petroleum to be Sold by March 2020.

Speaking at an interactive event here on the controversial CAA organised by the Chennai Citizens' Forum, she said the resolutions passed by some state assemblies, including Kerala, against the law was a political statement.

"We can understand that.But saying they will not implement it, then it is against the law. It is unconstitutional to say that... Everybody in this country has the responsibility to implement the law which has been passed in Parliament," she

The Kerala and Punjab assemblies have adopted resolutions demanding repeal of the CAA which has triggered widespread protests across the country. Kerala government has also moved the Supreme Court against the law.

Several state governments, including Kerala, Rajasthan, Madhya Pradesh, West Bengal and Maharashtra have voiced their disagreement with the CAA, as well as the NRC and the NPR. Sitharaman said that during the last six years, a total of 2,838 Pakistan nationals, 914 from Afganisthan and 172 from Bangladesh have received Indian citizenship. This included 566 Muslims.

"Besides, 4.61 lakh Tamils from Sri Lanka during the period 1964-2008 have received citizenships," she said. "This data is for those who comment that the government has not given citizenships for Muslims. For example, Adnan Sami, he is a singer of prominence. He received citizenship in 2016 when the same Prime Minister was there then", she said.

The minister also pointed to Bangladeshi writer Taslima Nasreen, who has been given residence permit since 2004. These figures would deny allegations made by the opposition that this government was giving citizenship only to some people and not for everyone. "There is no truth in it and that is not the right allegation," she said.

Appealing to those who oppose the CAA with folded hands, Sitharaman said if you have any objection speak and raise questions in the Parliament. "Please do not make any allegations which are not true and that would create unrest among the public", she said.

Noting that the CAA was a sensitive issue and needed to be handled carefully, she said there was no necessity to link NPR or NRC with this. "NPR is taken every 10 years and it was not brought in by Modi government in 2010. It was by the then Home Minister and senior leaders (of Congress)," she said. They had then spoken in support of NPR, but, were opposing it now, Sitharaman said adding it was not right.