Gujarat Assembly Elections 2022: BJP Has Never Won These Seats Despite Its Dominance For Past 27 Years

The BJP wrested the state from Congress for the first time in 1995. Since then, the state has been under BJP's rule. However, the lotus never bloomed in seven seats - Borsad, Jhagadia, Vyara, Mahudha, Anklav, Danilimda and Garbada. 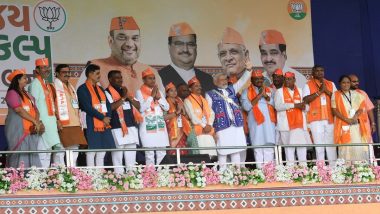 Ahmedabad, November 24: The assembly elections in Gujarat will be held in two phases on December 1 and December 5. The Gujarat assembly elections results 2022 will be declared on December 8. The state is witnessing a triangle contest between the ruling Bharatiya Janata Party (BJP) and the opposition Congress, and the new entrant Aam Aadmi Party (AAP). While Gujarat has been a BJP stronghold for a long, there are seats that the saffron party has never won. Gujarat Assembly Elections 2022: Full List of BJP Candidates and Their Constituency Names.

The BJP, which has been ruling Gujarat for the past 27 years, is seeking its seventh term in office. Prior to BJP's birth and prominence, Gujarat like many other states had been ruled by the Congress for many years. The BJP wrested the state from Congress for the first time in 1995. Since then, the state has been under BJP's rule. However, the lotus never bloomed in seven seats - Borsad, Jhagadia, Vyara, Mahudha, Anklav, Danilimda and Garbada. Gujarat Assembly Elections 2022: BJP Suspends 12 More Rebels for Contesting as Independent Candidates.

Despite losing power in 1995, the Congress has kept its hold on Borsad, Jhagadia, Vyara, Mahudha, Anklav, Danilimda and Garbada seats since then. In addition to these seats, there is Bhiloda, which the BJP bagged just once in 1995.

Since 1962,  Borsad, Jhagadia and Vyara have largely remained with the Congress. Mahudha has been a Congress stronghold since 1972.

In the 2017 Gujarat polls, the BJP was halted at 99 seats out of a total of 182 seats. This election, it is aiming at getting its highest seat tally exceeding 140. Will the BJP success in its Mission Gujarat? Will the lotus finally bloom this time in seats never won by the BJP? We will get to know on December 8.

(The above story first appeared on LatestLY on Nov 24, 2022 03:53 PM IST. For more news and updates on politics, world, sports, entertainment and lifestyle, log on to our website latestly.com).