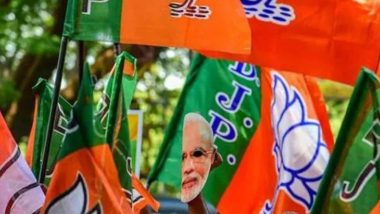 Mumbai, November 21: The state of Gujarat will go to polls in two phases starting December. The Gujarat Assembly Elections 2022 will be held in two phases - first on December 1 and then on December 5. The counting of votes for the Gujarat Assembly Elections 2022 will be held on December 8 along with that of Himachal Pradesh. The state will witness a stiff competition between the Bharatiya Janata Party (BJP), Congress and the Aam Aadmi Party (AAP).

Ahead of the assembly elections in the state, Home Minister Amit Shah, PM Narendra Modi and several BJP leaders have expressed confidence of coming to power with a record-margin win. The Gujarat Legislative Assembly has 182 seats with 89 constituencies going to vote in the first phase while the remaining 93 constituencies will exercise their vote in the second phase. Meanwhile, the BJP has released a list of 178 candidates and the debate for rest four seats is still underway, say reports. Himachal Pradesh Assembly Elections 2022: Full List of Congress Candidates and Their Constituency Names.

According to reports, exit polls and experts have predicted a grand victory for the ruling BJP party. Bookies in satta bazaar have also bid big time for a grand victory for the BJP with the saffron party expected to win highest number of seats in almost two decades. Gujarat Assembly Elections 2022 Dates and Complete Schedule: Voting To Be Held in Two Phases on December 1 and December 5, Results on December 8.

(The above story first appeared on LatestLY on Nov 21, 2022 08:47 PM IST. For more news and updates on politics, world, sports, entertainment and lifestyle, log on to our website latestly.com).