Imarti Devi Resigns as Madhya Pradesh Minister After Losing Bypoll From Dabra, Says 'Up to Shivraj Singh Chouhan to Accept or Reject Her Resignation' 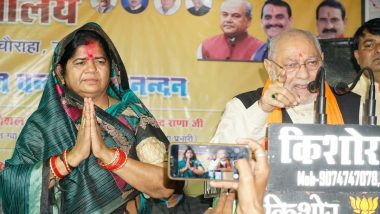 Bhopal, November 25: Imarti Devi Suman has resigned as Minister of Women and Child Development in Madhya Pradesh cabinet days after losing bypoll from Dabra assembly constituency. Congress candidate Suresh Raje had defeated Imarti Devi by a margin of 7,633 votes. In a video released Tuesday evening, the BJP leader said she has submitted her resignation to Chief Minister Shivraj Singh Chouhan, adding that it was up to him to accept or reject it.

"I have handed over my resignation to bhai sahab (Chouhan) and it’s up to him whether he accepts it or rejects it. You guys please get the confirmation from the CM… why am I being bothered on this time and again," she said. She was questioned over her continuation on the post of minister despite her bypoll loss. Earlier, Aidal Singh Kansana and Girraj Dandotiya, who also lost in bypolls from Sumawali and Dimni respectively, had resigned. Madhya Pradesh Bypoll Results 2020: BJP Wins 19 Seats, Congress Bags 9 in Bye-Elections Held for 28 Assembly Seats.

Devi was the most talked-about candidate in the bypolls due to her verbal spat with former Chief Minister Kamal Nath. While campaigning in Dabra, Nath had allegedly called Imarti Devi an 'item', drawing angry reactions from the BJP and censure from Rahul Gandhi and the Election Commission.

Considered a staunch loyalist of Rajya Sabha MP and Congress turncoat Jyotiraditya Scindia, Imarti Devi left the Congress to join the Bharatiya Janata Party (BJP) along with 21 other rebel legislators in March this year.

(The above story first appeared on LatestLY on Nov 25, 2020 01:42 PM IST. For more news and updates on politics, world, sports, entertainment and lifestyle, log on to our website latestly.com).