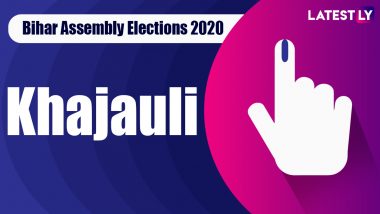 Patna, November 15: Arun Shankar Prasad of the BJP has won from the Khajauli Vidhan Sabha Seat after defeating RJD candidate Sitaram Yadav. The constituency is situated in the Madhubani district of Bihar. The voting in this constituency was held on November 7 in the third phase of Bihar Assembly Elections 2020. The current MLA of Khajauli constituency is Sitaram Yadav, who belongs to the Rashtriya Janata Dal (RJD) party. The counting of votes was held on November 10 and the result were also declared on the same day. Bihar Assembly Elections 2020 Phase 3 Dates And Schedule: Voting on November 7, Results on November 10.

While announcing the poll schedule for the 243-member Bihar assembly, the Election Commission said that the polling for Bihar assembly elections will be held in three phases on October 28, November 3 and November 7, followed by counting of votes on November 10. Elections in Bihar this year is one of the biggest elections globally during the COVID-19 pandemic.

In the outgoing Bihar assembly, the RJD has 80 members while the JD (U) has 69. The BJP has 54 seats, Congress has 25, while the remaining seats in the 243-member assembly are held by other parties. The voting for the first phase was held on October 28 which covered 71 assembly constituencies, the second-phase voting on November 3 covered 94 seats. The third phase of voting on November 7 covered 78 assembly seats. In Bihar, the ruling NDA faced a challenge from the RJD-Congress alliance (JDU+BJP) and the Mahagathbandhan (RJD+Congress+Left).

(The above story first appeared on LatestLY on Nov 15, 2020 04:58 PM IST. For more news and updates on politics, world, sports, entertainment and lifestyle, log on to our website latestly.com).