Senior Congress leader P Chidambaram has said the results of by-polls show the grand old party has no organisational presence on the ground or has weakened considerably. 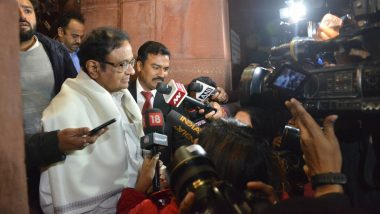 New Delhi, November 18: Former Union Finance Minister and senior Congress leader P Chidambaram has said the results of by-polls show the grand old party has no organisational presence on the ground or has weakened considerably. P Chidambaram's remarks came amid ongoing turmoil within Congress over Kapil Sibal's criticism of the party's poor show in the Bihar assembly elections. Speaking Without Doing Anything is Not Introspection: Adhir Ranjan's Dig at Kapil Sibal.

"I am more worried about the by-poll results in Gujarat, Madhya Pradesh, Uttar Pradesh and Karnataka. These results show that the party either has no organisational presence on the ground or has been weakened considerably," Chidambaram told Dainik Bhaskar newspaper in an interview. He also said that the party may have contested more seats in Bihar than it should have. What Barack Obama Wrote About Manmohan Singh, Rahul and Sonia Gandhi in New Book 'A Promised Land'.

Congress could win only 19 of 70 seats it contested in Bihar. "In Bihar, the RJD-Congress had a chance of winning. Why we lost despite being so close to victory is something that needs a comprehensive review. Remember, not long ago the Congress had won Rajasthan, MP, Chhattisgarh and Jharkhand," Chidambaram said. "The opposition alliance can get as many votes as the BJP-led coalition but to beat them, we have to strengthen our organization at the ground level," he added.

Kapil Sibal raised concerns over electoral defeats and criticised the leadership. He was slammed by many leaders including two Chief Ministers that of Rajasthan and Chhattisgarh for going public. Sibal who is one of the leaders who wrote the infamous letter in August had said that there was no forum to raise concern so he went public.

(The above story first appeared on LatestLY on Nov 18, 2020 05:41 PM IST. For more news and updates on politics, world, sports, entertainment and lifestyle, log on to our website latestly.com).