In a relief to Rashtriya Janata Dal (RJD) leader Lalu Prasad Yadav, the Central Bureau of Investigation (CBI) has closed a preliminary inquiry against him in connection with a bribery case. 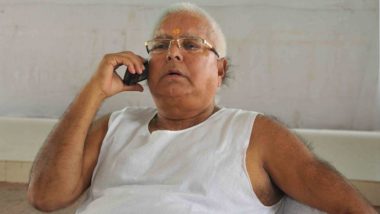 New Delhi, May 22: In a relief to Rashtriya Janata Dal (RJD) leader Lalu Prasad Yadav, the Central Bureau of Investigation (CBI) has closed a preliminary inquiry against him in connection with a bribery case. According to multiple reports, the CBI close the inquiry against Lalu Prasad Yadav over lack of solid evidence against him. It was alleged that real estate developer DLF Group had bribed Lalu Yadav in a bid to win railway-related projects. Lalu Prasad To Hold Virtual Meeting With Party MLAs, MPs on COVID-19 Crisis in Bihar.

The Economic Offence Branch of CB had launched the probe in 2018. It was alleged that DLF Group, through shell companies including AB Exports, purchased a property in Delhi's New Friends Colony at a cheaper price in 2007. In 2011, Lalu Yadav's son Tejashwi and daughter Ragini allegedly bought over AB Exports for only Rs 4 lakh by transfer of shares and got ownership of the plush property in the national capital. Lalu Prasad Yadav Stressed Over Elder Son Tej Pratap’s Decision to Divorce Aishwarya Rai.

This was allegedly done because the DLF Group wanted to get some projects at New Delhi Railway station and the Bandra station in Mumbai. The Income Tax department had also initiated a separate inquiry in the case. However, after two years of investigation, the "preliminary enquiry was closed as no case has been made out of the allegations", sources were quoted by NDTV as saying.

Lalu Yadav, the former Railway Minister, has been out on bail since April after spending more than three years in jail in connection with the fodder scam. Post release, he has been convalescing at his residence in Delhi.

(The above story first appeared on LatestLY on May 22, 2021 01:43 PM IST. For more news and updates on politics, world, sports, entertainment and lifestyle, log on to our website latestly.com).