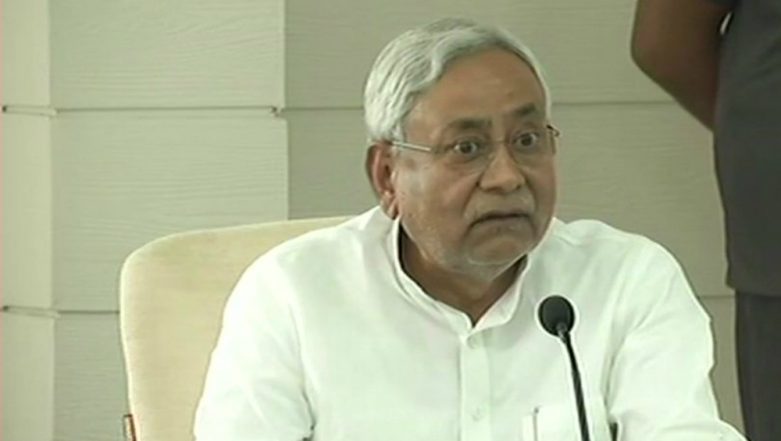 "Lalu will not get out of jail despite whatever he does. His family has been repeatedly alleging that Lalu was framed by me and he was in jail due to me. It is a baseless accusation as Lalu was convicted by the court and sentenced to jail," the Janata Dal-United (JD-U) leader told an election meeting here. Lalu Prasad Yadav Targets Nitish Kumar Over JD(U) Poll Symbol, Says 'Arrow' Marks Violence.

He said that Lalu Prasad has been trying to get out of the jail on bail to capture power again in Bihar. "During 15 years of Lalu's rule, 'jungle raj' prevailed in Bihar. When he was arrested and jailed in 1997, Lalu made his wife the Chief Minister.

"Unlike Lalu's time, today there is rule of law in Bihar. There will be no compromise on this issue," the Chief Minister said.

"It is his desperation ahead of the seventh and last phase of the Lok Sabha polls."

By making such a comment, Tejashwi Yadav said, Nitish Kumar had admitted that he along with his henchmen conspired to sent Lalu Prasad behind the bars. "He has exposed his double face."

Lalu Prasad, now undergoing treatment at a government hospital in Ranchi after being convicted in a fodder scam, on Monday accused Nitish Kumar of making compromises to be in power.