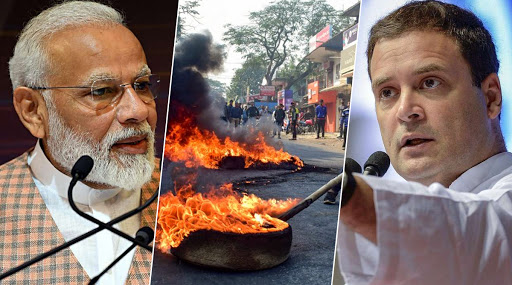 Dumka, December 15: Prime Minister Narendra Modi on Sunday congratulated the people of Assam for keeping away violence and making their points peacefully against the recently enacted Citizenship Amendment Act. The Premier also attacked the opposition Congress and its allies for raising the storm over citizenship law, and alleged they are behind the unrest and arson in North-East.

Addressing an electoral rally in Dumka, ahead of the Phase 4 Jharkhand Assembly Elections, PM Modi said, "Congratulate brothers and sisters of Assam for keeping away violence, they're making points peacefully." Adding on, he said, "Congress and its allies have raised storm over citizenship law; they are behind unrest and arson." Citizenship Act Protests in Assam: Two More Protesters Succumb to Bullet Injuries, Death Toll Jumps to Five.

Earlier too Thursday, PM Modi assured the people of Assam not to worry against the Cititzenship Amendment Bill, which was passed by the Rajya Sabha on Wednesday, amid massive uproar. PM Modi took to Twitter and had written, "I want to assure my brothers and sisters of Assam that they have nothing to worry after the passing of #CAB. I want to assure them- no one can take away your rights, unique identity and beautiful culture. It will continue to flourish and grow."

I want to assure my brothers and sisters of Assam that they have nothing to worry after the passing of #CAB.

I want to assure them- no one can take away your rights, unique identity and beautiful culture. It will continue to flourish and grow.

Following the tweet, PM Modi was attacked by the opposition, as the mobile and internet services were scrapped in Assam after violent protests since Wednesday. Also, President Ram Nath Kovind's assent to the CAB on the intervening night of November 12-13 added fuel to the ongoing protests. Assam Unrest: Internet Ban Extended Across State Till December 16 as Tensions Prevail Over Citizenship Amendment Act.

In the meantime, two more protesters, who were injured in action by security forces while quelling the agitation in Guwahati, have succumbed to their injuries on Sunday. The deceased, identified as Ishwar Nayak and Abdul Alim, were admitted to the Guwahati Medical College on Thursday after they were sustained bullet injuries. With two more deaths, the fatality toll in ongoing unrest in Assam has jumped to five. Nearly 30 others were left injured in the police action carried out on Thursday.

As the protests gaining momentum, the administration had to deploy five companies of Indian Army and other companies of paramilitary forces. Apart from the internet ban, curfew were also imposed in 10 districts of Assam, and selected districts of Tripura, Mizoram and Meghalaya. Mobile internet was also scrapped in the neighbourinhg states of Assam. Meanwhile, the Assam Director General of Police (DGP) B J Mahanta on Saturday informed that they have arrested over 100 and rounded up over 2,000 suspects to prevent the escalation of protests in the region. Citizenship Act Protests: Indian Army Issues Advisory Against Social Media Posts Spreading 'Fake News' on Northeast Unrest.

Assam, which has been witnessing protests over the Citizenship Amendment Act since earlier this month, was pushed on the edge after the Parliament cleared the Bill to make the law effective. As per the CAA, non-Muslim refugees who entered India from Pakistan, Afghanistan and Bangladesh before December 31, 2014 would be naturalised. The indigenous groups in Assam have called it a violation of the 1985 Assam Accord -- which promised the expulsion of infiltrators irrespective of their caste or religion.