PM Narendra Modi Tears Into Congress During Reply on Motion of Thanks to President's Address in Rajya Sabha, Speaks on CAA, Article 370, $5 Trillion Economy, GST And POSCO Act Among Other Issues

'Is it ok to misguide and misinform the nation? Can anybody be a part of a campaign that does the same? The path being taken on CAA by many Opposition parties is unfortunate,' said the Prime Minister in his Rajya Sabha speech. 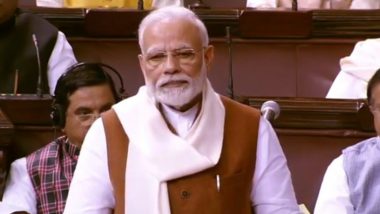 New Delhi, February 6: Prime Minister Narendra Modi, in his reply on Thursday in the Rajya Sabha on the Motion of Thanks for President's Address, defended the government's decision to abrogate Article 370 in Jammu and Kashmir and said that the essential parameters of the Indian economy are strong. Speaking on the Citizenship Amendment Act (CAA), the Prime Minister attacked the Opposition and said that, "Why could they not see the pain of minorities in the neighboring countries and opposing the CAA?" The Prime Minister said that it is the duty of the house to protect the Hindus in Pakistan and quoted socialist stalwart Ram Manohar Lohia in his speech to drive home the point. The Prime Minister touched upon issues such as NPR and other initiatives by the Central Government such as $5 Trillion Economy, POSCO act amendment and various others issues. Highlights of PM Modi's Address in Lok Sabha.

"Is it ok to misguide and misinform the nation? Can anybody be a part of a campaign that does the same? The path being taken on CAA by many Opposition parties is unfortunate," said the PM in his speech. The Prime Minister spoke at large about the anti-CAA protests and said that, "CAA has been discussed in the House. Here again and again it was tried to tell that chaos was spread in the name of demonstrations in many parts, the violence that took place was considered the right of movement." PM Narendra Modi Takes Stinging Jibe at Rahul Gandhi in Lok Sabha, Says 'Many Tubelights Are Like This' (Watch Video).

The Prime Minister said that the "Citizenship Amendment Bill was presented in the Lok Sabha in 2003. PM Modi added that the Standing Committee of Parliament which participated in the discussions and took it forward had many Congress members who are present in the house even now."

Speaking on the NPR, the PM said that, "NPR and census are normal Govt procedures, which have been carried out earlier also. But when vote bank politics is a necessity for those who carried out NPR earlier, they spread misinformation about it now." There was an uproar by the Opposition during the PM's remarks on NPR and language issue.

Touching upon the topics of 'Ease of Doing Business' and 'Ease of Living in India', the PM claimed that the government's steps had helped improve the indices. Rahul Gandhi Reacts to PM Modi's Address in Lok Sabha, Says Focus on Unemployment Instead of 'Congress, Pakistan, Nehru'.

Crediting late BJP leader and former Finance Minister Arun Jaitley with simplifying the Goods and Services Tax (GST), PM Modi said that he did whatever he could in his capacity as Prime Minister to ensure effective implementation of GST.

"The world has high expectations from India in this decade and Indians have high expectations from us. The efforts of all of us to fulfill these expectations should be in line with the aspirations of 130 crore Indians," said the PM and remembered Mahatma Gandhi in his speech. The Prime Minister thanked the President and ended his speech by appealing everyone to walk together and in light of the Constitution of India.

(The above story first appeared on LatestLY on Feb 06, 2020 06:10 PM IST. For more news and updates on politics, world, sports, entertainment and lifestyle, log on to our website latestly.com).