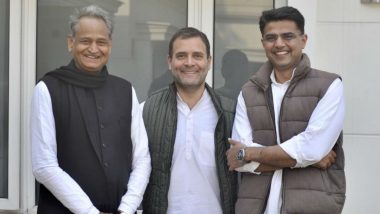 New Delhi, August 10: Amid speculation of a meeting between rebel Rajasthan leader Sachin Pilot and Rahul Gandhi, top sources in the Congress have claimed that a deal has been struck between the two sides and a formal meeting may take place on Monday itself. The development comes after party General Secretary Priyanka Gandhi met Rahul Gandhi at his residence to work out the deal. However, there is still no official word yet while all eyes are on 10 Janpath, the official residence of interim party chief Sonia Gandhi. Sachin Pilot Meets Rahul Gandhi, Priyanka Gandhi Vadra Amid Rajasthan Political Crisis: Reports.

The Congress sources say that there were no preconditions from both the sides and they hope for a happy ending to the crisis that has threatened its government in the state. The Congress sources said that veteran party leader Ahmed Patel had pitched in to resolve the issue that had threatened the survival of the Ashok Gehlot government after the Pilot camp raised the banner of revolt against it. Rajasthan Assembly Session: Ashok Gehlot Urges MLAs to 'Save Democracy', Defends Merger of 6 BSP Legislators With Congress.

The Congress had sacked Pilot as Deputy Chief Minister and the state party chief. So far, Gehlot has stayed put as Chief Minister amid claims and counter-claims on attempts to poach MLAs. On Sunday night, a Congress Legislature Party meeting was held in a Jaisalmer hotel, where MLAs from the Gehlot camp are lodged, and there were mixed views on welcoming back the rebels into the party fold.

While a few MLAs suggested that the rebels should be accepted in view of the "wafer-thin margin" of the Gehlot government in the Assembly, others were not in such a forgiving mood. Meanwhile, the Gehlot camp in Jaisalmer is keeping a wary eye on any development in Delhi vis-a-vis the proposed meeting.

A senior Congress worker confirmed to IANS that a few Ministers from Rajasthan had been intimated about the meeting and the views of party lawmakers had been sought over the move to end the rebellion.

(The above story first appeared on LatestLY on Aug 10, 2020 05:07 PM IST. For more news and updates on politics, world, sports, entertainment and lifestyle, log on to our website latestly.com).