Eight BJP candidates filed their nomination papers on Tuesday for the biennial elections to the Rajya Sabha from Uttar Pradesh. 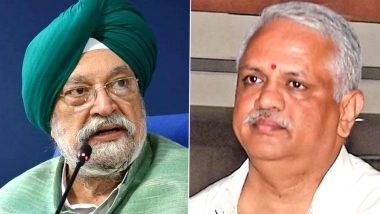 UP Chief Minister Yogi Adityanath and state BJP chief Swatantra Dev Singh were present on the occasion. Only select media persons were allowed to cover the event. Filing of nominations for the Rajya Sabha elections will close at 3 pm on Tuesday. Elections will be held for 10 Rajya Sabha seats in Uttar Pradesh and one in Uttarakhand on November 9. The BJP can comfortably win nine Uttar Pradesh seats.

The biennial elections have been necessitated as certain Rajya Sabha members are due to retire on November 25. They are Chandrapal Singh Yadav, Javed Ali, Ravi Prakash Verma, Ram Gopal Yadav (all from Samajwadi Party), Veer Singh and Rajaram (Bahujan Samaj Party), Raj Babbar and PL Punia (both from Congress), and Neeraj Shekhar, Hardeep Singh Puri, and Arun Singh (all from BJP). Raj Babbar was elected from Uttarakhand whereas the rest represented Uttar Pradesh in the Upper House.

(The above story first appeared on LatestLY on Oct 27, 2020 02:31 PM IST. For more news and updates on politics, world, sports, entertainment and lifestyle, log on to our website latestly.com).