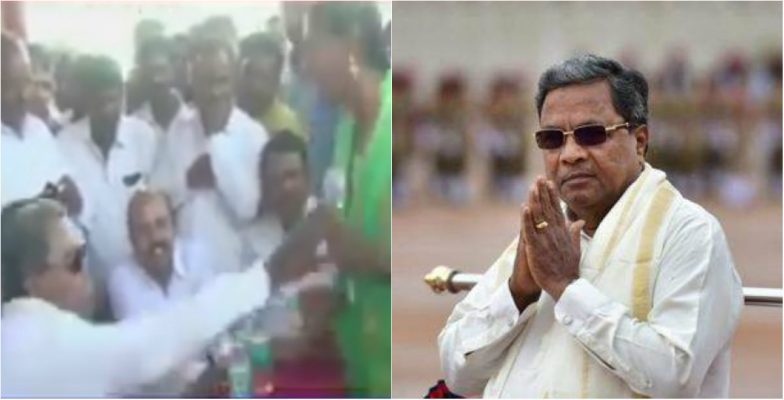 Mysuru, January 28: Former Karnataka chief minister Siddaramaiah stoked a controversy on Monday, when he "misbehaved" with a woman at a public outreach event organised by the Congress in Mysuru. In the video clip making the rounds on social media, he could be seen yelling at the woman and snatching the mic from her.

Siddaramaiah's actions drew flak from the political rivals, with the BJP accusing him of outraging the modesty of the woman. Senior BJP leader S Prakash said the Congress should issue an apology and take appropriate action against Siddaramaiah for his gesture. Sexist Remarks Continue; ‘BJP Making Hema Malini Dance for Votes’, Says Congress Leader.

"Is this the way a former CM behaves with the people," Prakash asked, adding that this is the manner in which the Congress treats the voices of dissent.

Here is the video of the incident:

The BJP has charged Siddaramaiah of "outraging the modesty" of the woman by pulling her "dupatta". However, it appears through the video that the cloth was accidentally pulled while snatching the microphone.

"Rahul Gandhi should tell what he'll do with him. This is a crime, the way he abused her. That's how they see women, they haven't changed since the tandoor case. They only respect women from one family," Union Minister Prakash Javadekar said.

The National Commission for Women (NCW) has taken cognizance of the incident, and will write to the Karnataka Police demanding appropriate action against Siddaramaiah.

The incident involving the ex-CM came hours after the Congress-JD(S) coalition government in the state faced another turmoil, with Chief Minister HD Kumaraswamy threatening to resign.

"If they (Congress MLAs) want to continue with the same thing, I am ready to step down. They are crossing the line", Siddaramaiah told reporters earlier in the day, on being asked whether the Congress legislators are saying that "Siddaramaiah is their CM".