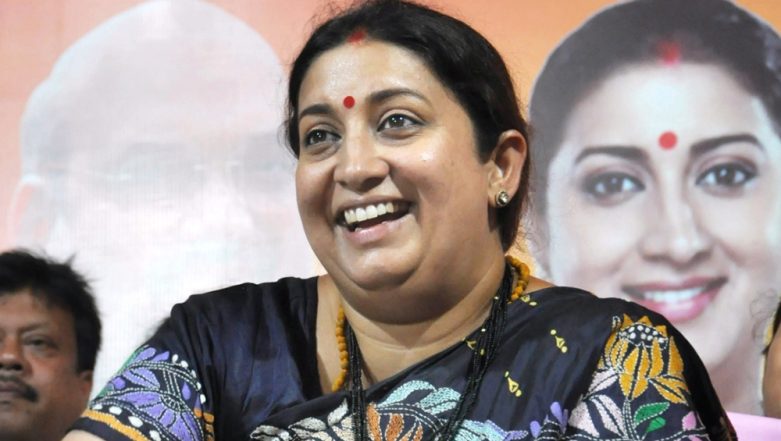 Amethi, June 22: Union Minister Smriti Irani on Saturday took an ailing woman to hospital in her convoy ambulance in Amethi. In the video, the union minister is seen directing her officials to take the woman to the district hospital. Relatives of the woman are also seen boarding the ambulance. The video is doing rounds on social media. Rahul Gandhi Suffers Embarrassing Loss in Congress Stronghold Amethi Lok Sabha Constituency.

Video of Smriti Irani taking the ailing woman to hospital:

Woman alls at the feet of Union Minister Smriti Irani:

Meanwhile, in a separate incident in Amethi, a local woman falls at the feet of Union Minister Smriti Irani on the stage. The woman was complaining of land grabbing by family members. The Bharatiya Janata Party MP from Amethi immediately took cognizance of the matter and assured the woman of action.' Amethi Has Chased Him Away': Smriti Irani on Reports of Rahul Gandhi Considering to Contest From South in Lok Sabha Elections 2019

#WATCH Amethi: A local woman falls at the feet of Union Minister Smriti Irani on the stage, complaining of land grabbing by family members. Smriti Irani took cognizance of the matter and assured the woman of action. pic.twitter.com/FwR3pKZ3MW

Irani along with Goa Chief Minister Pramod Sawant is on a two-day visit to Amethi.  Both the leaders also visited Amethi’s Barolia village to meet family members of BJP worker Surendra Singh who was recently murdered. Former village head Singh was killed on May 25

Former Goa Chief Minister Manohar Parrikar had adopted Barolia in 2015 as a Rajya Sabha MP from Uttar Pradesh. “We are saddened at the death of Singh. He was a devoted party worker and the party stands with his family,” Sawant told reporters after meeting the family.