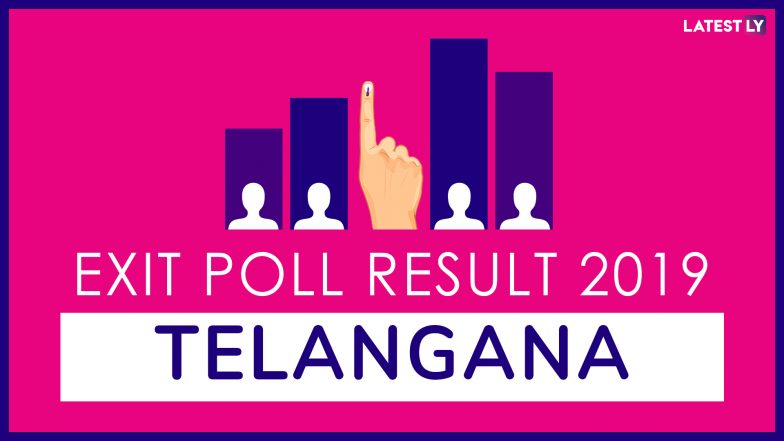 Hyderabad, May 19: The ruling Telangana Rashtra Samithi (TRS) is predicted to win an average of 12 seats in the Lok Sabha elections in Telangana, according to exit polls. The Congress may bag two seats whereas the BJP is likely to get just one seat in Telangana, said exit polls conducted by various pollsters.

Today's Chanakya has predicted 14 seats for the TRS. The BJP and the Congress will win one seat each, said the exit poll conducted by Today's Chanakya. Polling for 17 Lok Sabha seats in Telangana was held on April 11 in the first phase of general elections. 62.69 per cent of total electorate exercise their democratic right in polls, said the Election Commission.

The TRS, led by Chief Minister K Chandrasekhar Rao or KCR, contested 16 seats and left Hyderabad Lok Sabha seat for All India Majlis-e-Ittehadul Muslimeen or AIMIM's Asaduddin Owaisi who is seeking re-election for a fourth consecutive term. What Are Exit Polls? Know All About The Post-Poll Surveys And Predictions For Lok Sabha Elections 2019.

Both the BJP and the Congress fielded candidates on all 17 seats, while the Telugu Desam Party (TDP) opted out of the electoral contest in the state. This is the first general election held in Telangana since the formation of the state on June 2, 2014, after bifurcation of Andhra Pradesh. In 2014 Lok Sabha polls in undivided Andhra Pradesh, the TRS had won 11 out of 17 seats in Telangana region, the Congress bagged two and the BJP, Telugu Desam Party (TDP) and YSR Congress got one seat each. Exit Poll Result of Lok Sabha Elections 2019: Why Should You Not Believe The Numbers?

Months before Lok Sabha elections, Assembly polls were held in Telangana. The TRS had won 88 seats in the 119-member House. Stay connected with us to catch live updates on Telangana exit poll results.