Exit Poll Result of Lok Sabha Elections 2019: Should You Believe The Numbers? 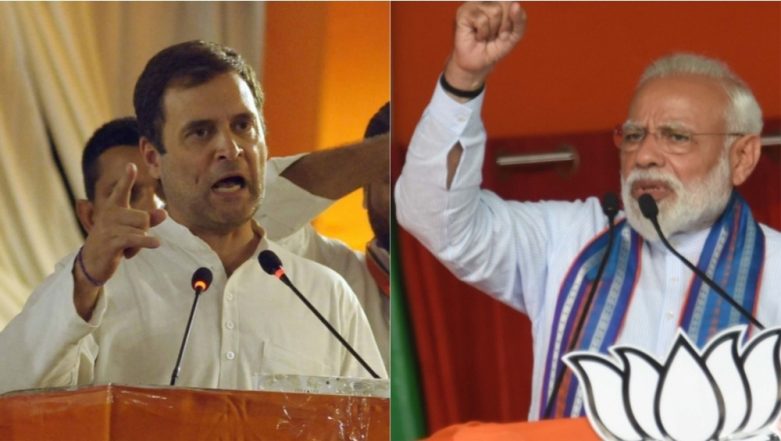 The exit poll result of Lok Sabha elections 2019 will be revealed by news channels and pollsters this evening. The exit polls will predict the number of seats the Bharatiya Janata Party (BJP) led National Democratic Alliance or NDA and the United Progressive Alliance or UPA, headed by the Congress, may win in the Lok Sabha elections. Political pundits are of the view that parties that are neither aligned with NDA nor with UPA might play a crucial role in the next government formation. What Are Exit Polls? Know All About The Post-Poll Surveys And Predictions For Lok Sabha Elections 2019.

The 2014 election was easy to predict. Not only political analysts but also people knew Narendra Modi led BJP was coming to power and the Congress would sit in opposition. Riding on Narendra Modi's popularity, the BJP had won an absolute majority of 282 seats. It was not a 'wave' in terms of the popular vote but a landslide in seats. However, the 2019 Lok Sabha poll is an entirely different story. There is a consensus among journalists on the ground and political observers that no party has a clear edge over its opponents. Lok Sabha Elections 2019 Schedule: How Staggered Polling Could Help BJP.

Since no party appears like a frontrunner, no one really knows how many seats the BJP or Congress will actually win or lose. Even in 2014, when it was easy to predict the election outcome, not many could forecast either the scale of Modi’s victory or Congress's defeat with certainty. A majority of exit polls had said that the NDA would win with a simple majority. However, it was the BJP that had established a simple majority on its own and the NDA went beyond 300 seats. Only Chanakya had predicted over 300 seats for the NDA. Priyanka Gandhi Vadra Should Act Like a Politician if She Wants to Take on PM Narendra Modi.

Hence, it is more difficult to anticipate the outcome of the 2019 Lok Sabha elections. Moreover, too many wrong predictions about one's extent of victory or defeat could actually lead to an entirely incorrect forecast of the national outcome. In a recent article, Yogendra Yadav, a leading psephologist, has explained how pollsters can be wrong about BJP's prospects in the 2019 Lok Sabha polls if they underestimate the extent of victory of its opponents. He says pollsters make two types of error - Type-1 error and Type-2 error.

"Type-1 is the most common error made by pollsters. They are risk-averse, and hence play it safe. They get the winner right, but underestimate the extent of victory," Yadav explained. To understand this, one can recall what has happened in Delhi in 2015 or in Uttar Pradesh in 2017. In a landslide victory, the Aam Aadmi Party (AAP) won 67 out of 70 Assembly seats in Delhi in 2015. Similarly, in Uttar Pradesh, the BJP won 325 seats out of 400.

"Most pollsters predicted the victor but almost no one got the extent of the victory right," he wrote. Explaining the Type-2 error, Yadav writes: "Type-2 error is where one gets the victor wrong or predicts a big sweep that does not happen." "A series of Type-1 errors can lead them into making Type-2 error. A tendency to play it safe can land the pollsters into the most risky situation of getting the victor and the loser wrong. This is what is likely to happen with the pollsters in 2019," he opined.

Pollsters may repeat the 2004-type blunder (Type-1 error) if they underestimate the extent of the DMK-Congress alliance's victory in Tamil Nadu or BJP led NDA's in the northeast. Over-estimation of BJP's seats in Hindi heartland or Congress's in Gujarat or Maharashtra or Karnataka could also result in the same Type-1 error. Now, why would any pollster underestimate or overestimate a party's tally and make a wrong prediction? They won't do deliberately. The Type-1 error might happen because they would attempt to play safe.

Despite Congress and its president Rahul Gandhi's resurgence, many still believe Modi's popularity has remained intact. This perception could force a pollster who plays it safe to understate the BJP’s losses in every state. A recent example of such safe play by pollsters was witnessed in Australia where the results of federal elections were declared yesterday. As many as 43 opinion polls since 2016 had shown the Labour Party ahead. The exit polls gave the party 4 per cent lead over the Liberal Coalition. When the result came, the Liberal Coalition won and Labour lost.

Another important point is the ambiguous picture that the electorates are throwing which has made it extremely difficult to predict the likely result of the 2019 Lok Sabha elections. Speaking at the Express Adda, Ruchir Sharma, author and global investor who recently concluded his 28th election trip, said the 2019 Lok Sabha poll is the most unpredictable anyone’s ever seen in this country so far. "Obsession with numbers is natural, but pointless. Having travelled around the country this time, I can tell you that anyone who predicts a number with any certainty is a charlatan," Sharma said at the event.

I am not suggesting that you should stop following the exit polls. Just don't make any bets on the numbers.