Uttar Pradesh Assembly Elections 2022: From Ayodhya to Amethi, Here Are The Five Key Contests in The Fifth Phase of UP Polls

The polling for the fifth phase of UP Assembly Elections 2022 will be held on 61 assembly seats in 12 districts on February 27. Election campaigning of all parties is set to end at 5 pm on February 25. 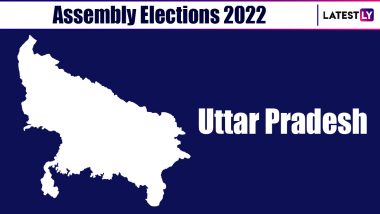 The fifth phase of UP elections will be politically crucial as much anticipated assembly seats such as Ayodhya, Amethi, Barabanki, Allahabad South, Chitrakoot, etc will be undergoing polls. Out of 61 assembly seats, 13 are reserved seats for Scheduled Caste candidates. A total of 685 candidates are in the fray in the fifth phase of the UP Vidhan Sabha polls. Uttar Pradesh Assembly Elections 2022 Dates And Full Schedule: Voting in 7 Phases on Feb 10, 14, 20, 23, 27, March 3, 7; Counting And Results on March 10.

Here Are the Key Battles in Phase 5 of UP Polls:

In a high-profile contest, BJP MLA Ved Prakash Gupta is up against SP’s Tej Narayan Pandey. Gupta won the seat in 2017 defeating Pandey. This will be the first election to be held on Ayodhya after the 2019 Supreme Court verdict on the Ramjanambhoomi-Babri Masjid case. Meanwhile, the seat has a large number of Brahmin votes, and Tej Narain Pandey, being from the Brahmin community, might be the reason why BJP fielded its sitting MLA Ved Prakash Gupta on the seat.

Sanjaya Sinh, the erstwhile ‘Raja of Amethi’ has entered the state polls on BJP's ticket for the first time in 33 years. He will be up against Congress' Ashish Shukla and Maharaji Prajapati of the SP. Uttar Pradesh Assembly Elections 2022: From Sanjaya Sinh to Tej Narayan Pandey, Here is The List of Five Key Candidates in Phase 5 of UP Polls.

Barabanki assembly seat is a stronghold of Dharmraj Singh Yadav. He has won every assembly election from Barabanki since the inception of the legislative constituency. Yadav is again contesting the Barabanki seat against Ramkumari Maurya of BJP.

The contest on the Allahabad South (Prayagraj) seat will be an interesting one to watch as UP cabinet minister Nand Gopal Gupta will take on Raees Chandra Shukla of the SP and Aplana Nishad of the Congress.

Congress has fielded Nirmala Bharti on the Chitrakoot Sadar seat, where she will be up against Chandrika Prasad Upadhyay of BJP and Anil Pradhan Patel of SP. Nirmala Bharti, a post-graduate, had won in 2016 Panchayat election in Ward number 3. Bharti is also a member of the Bhartiya Kisan Union (BKU).

In the 2017 assembly elections, the BJP alliance had won 50 seats out of the 61 seats. SP bagged 5 seats, BSP only 3 seats, and the Congress had to settle for just 1 seat. Four phases of polling, covering 231 of 403 seats, have been completed in the Uttar Pradesh assembly election.

(The above story first appeared on LatestLY on Feb 25, 2022 08:52 PM IST. For more news and updates on politics, world, sports, entertainment and lifestyle, log on to our website latestly.com).