The Supreme Court on Saturday directed the Centre to form within three months a trust which will build a Ram temple at the disputed site in Ayodhya. 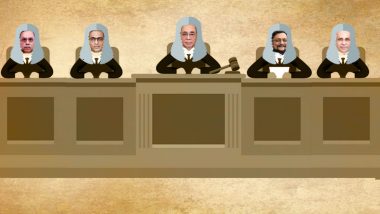 New Delhi, November 9: The Supreme Court on Saturday directed the Centre to form within three months a trust which will build a Ram temple at the disputed site in Ayodhya. Ruling that there is clear evidence that the Hindus believed Ram was born at the disputed site, the five-judge bench said the Sunni Waqf Board, which was a party to the 7-decade-old title suit, should be given an alternate five-acre land at some other suitable place for construction of a mosque. Ayodhya Verdict Quotes: From PM Narendra Modi to Amit Shah and Other Key Leaders, Who Said What on the Supreme Court Judgment.

The apex court rejected the claim of Nirmohi Akhara of being a 'shebait' (a devotee who serves the deity). It, however, said that in the board of trustees, appropriate representation should be accorded to Nirmohi Akhara, even though its suit was dismissed. The bench said that Hindus consider the disputed site as the birthplace of Lord Ram and this belief is beyond judicial scrutiny. The 1045-page verdict of the Supreme Court is now available on its website. Highlights of the Supreme Court Judgement in the Ayodhya Case.

In its judgment, the Supreme Court held that there evidence of a structure beneath the disputed site. The top court observed that the Sunni Waqf Board was unable to prove exclusive ownership of the disputed land, adding that the outer courtyard has been under exclusive possession of Hindus over the years. The top court ruled that the Allahabad High Court verdict of 2010, giving land to the Sunni Waqf Board and Nirmohi Akhara, was wrong.

(The above story first appeared on LatestLY on Nov 09, 2019 12:55 PM IST. For more news and updates on politics, world, sports, entertainment and lifestyle, log on to our website latestly.com).