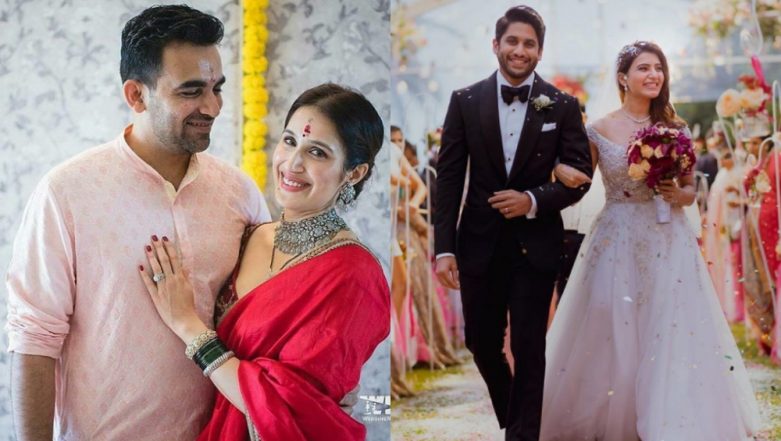 Marriages are made in heaven, but weddings take place on earth. As it can be seen, 2017 has turned out to be quite an eventful year for lovey-dovey celebrity couples. The romantic pairs got hitched in style, opting for either grand destination weddings or low-key private family affairs. These public figures from the sporting world, telly land and films took their relationship level to another level and we could not be more excited. What made these events so interesting was their stark yet lovely difference. For instance, former Indian cricketer, Zaheer Khan and his actress girlfriend, Sagarika Ghatge opted for a court marriage, current Team India mainstay, Bhuvneshwar Kumar had a wonderful arranged marriage. Not just the cricketers, the year also saw filmy and television couples like Samantha Ruth Prabhu-Naga Chaitanya and Bharti Singh-Haarsh Limbachiyaa finally get hitched. Here’s a look at the list of couples who married this year.

Zaheer Khan married Sagarika Ghatge on November 23, 2017, to join in the bandwagon of glamourous cricketer-actress Jodis. The Indian bowling legend and Bollywood starlet opted for a registered marriage, which was followed by extravagant cocktail party and wedding reception in Mumbai. Zak had met the Chak De! India star via mutual friends. Earlier in April, they had announced their engagement by sharing a sweet picture on the micro-blogging platform.

A post shared by Samantha Akkineni (@samantharuthprabhuoffl) on Oct 6, 2017 at 10:09pm PDT

Actor pair Samantha Ruth Prabhu and Naga Chaitanya had a fairy-tale wedding in the true sense. The social media could not get enough of the grand alliance of the good-looking individuals. The 30-year-old actress wed her beau on February 6 as per Hindu traditions followed by Christian wedding celebrations the next day. The wedding pictures of Samantha and Naga Chaitanya are a pure delight to watch.

Country’s most popular female comedian, Bharti Singh tied the knot with her long-time boyfriend, Haarsh Limbachiyaa on December 3, 2017. The laughter queen had a big fat wedding in Goa with who’s who of the television industry in attendance. From fun bachelorette with her girlfriends to having Mehandi and sangeet ceremonies to finally taking saat pheras with Haarsh, Bharti’s wedding turned out to be one grand affair.

Telly couple Aashka and her long-time beau Brent Goble took their wedding vows in two different ceremonies. Firstly, the Naagin actress and Goble married on December 1 in Christian wedding ceremony. Two days later, they had a traditional Hindu wedding in Ahmedabad. Everything about their nuptials was lavish and royal. From Aashka’s bridal trousseau (both white gown and regal pink lehenga) to Brent’s smile on seeing his bride, it was just perfect.

The Haasil actor tied the knot with his former co-star on November 28, 2017. Vatsal and Ishita met on the sets of Life OK’s daily soap Rishton Ka Saudagar – Baazigar and fell in love. Despite signing a no-dating clause, the two had begun their romantic relationship. Finally, after months of lovely courtship, the couple got hitched in a simple yet beautiful wedding in Mumbai. Vatsal is currently busy with Sony TV’s drama-thriller Haasil while his gorgeous wife was last seen in Firangi, a Bollywood epic-comedy opposite Kapil Sharma.

Aisha actress Amrita Puri married her boyfriend, Imrun Sethi in a traditional Sikh wedding on November 11, 2017. The destination marriage ceremony was a grand affair taking place over three days in Thailand’s capital, Bangkok. The daughter of Aditya Puri, Managing Director, HDFC Bank, looked one pretty bride in classic light peach lehenga by Sabyasachi. Meanwhile, the groom donned a cream sherwani and turban to match his gorgeous partner. It was quite a dreamy affair, something that will be cherished by the couple as well as everyone who was part of it.

Television’s most Dabangg policewoman, Kavita Kaushik surprised her fans with the announcement about her wedding with Ronnit Biswas. The FIR actor got married to her best friend on January 27, in a low-key affair, which included just their families and close friends. However, it was Kavita’s unique wedding destination that got her followers excited. The pair got hitched in a simple wedding at a Shiv-Parvati temple in Kedarnath. The actress later posted pictures of her marriage ceremony on the social media.

Bollywood actor Neil Nitin Mukesh found the love of his life in Rukmini Sahay. The young couple tied the knot at the picturesque wedding destination of Udaipur on Feburary 9, 2017. The multiple-day celebrations began with the ring ceremony, followed by mehandi, sangeet, chuda chadai, nuptial rituals and a cocktail party. In true sense, Neil and Rukmini’s wedding was a royal affair.

Cricketer Bhuvneshwar Kumar married his fiancée Nupur Nagar in a lavish wedding in Meerut, his hometown on November 23. It was attended by couple’s families and close friends. They held a resplendent wedding reception a week later in Delhi. It was attended by his teammates and cricketing stars including MS Dhoni, Virat Kohli.

Apart from the weddings mentioned above, there were few other taking places in the telly world. Actresses Soumya Seth, Pooja Banerjee, Nauheed Cyrusi, Navina Bole, Hrishita Bhatt, Shireena Sambyal and Panchi Bora got hitched this year. Let us know if we missed out on any high-profile celebrity weddings. As of now, we look forward to 2018 with more big fat Indian marriage ceremonies taking place.