Today (October 16), Jennifer Winget took to the photo-sharing app to share a couple of pictures, where she can be seen sporting a shimmery black outfit with a sheer embellished cape by Dimple Shroff. In the pictures from her recent dark-themed photoshoot, the actress can be seen showcasing her wild and dark side. 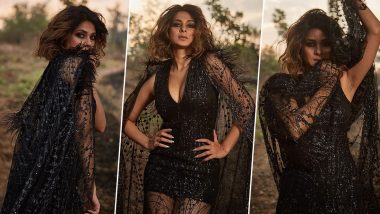 Check out the pictures of Jennifer Winget in this latest photoshoot. (Photo Credits: Instagram)

Television actress Jennifer Winget is one of the most sought-after actresses of the entertainment industry today. The diva, who is a social media sensation with an enviable fan following on Instagram, has taken the fashion world by storm with her sartorial experiments and fearless style sense. She has turned heads with not just her western looks but also aces the ethnic avatar with equal grace and finesse. Jenny will soon be making her comeback on the small screen with the second installment of Sony TV's much-loved show Beyhadh. While fans of the actor, who cannot wait for the show to go on air, are waiting with bated breath to watch her once again essay the role of vicious Maya, the actress has been teasing them with posters and promos of Beyhadh 2. Beyhadh 2 New Promo Out! Jennifer Winget Looks Deadly as She Swings on Ropes and It Is Guaranteed to Give You Goosebumps (Watch Video)

Today (October 16), Jennifer took to the photo-sharing app to share a couple of pictures, where she can be seen sporting a shimmery black outfit with a sheer embellished cape by Dimple Shroff. In the pictures from her recent dark-themed photo shoot, the actress can be seen showcasing her wild and dark side. Sharing the pictures on the photo-sharing app, Jennifer wrote, "The Dark Night /Might Rises! #MayaAgain #airingsoon on @sonytvofficial" Jennifer Winget Looks Straight Out of a Fairy Tale in Her Latest Instagram Post (View Pic)

"No great mind has ever existed without a touch of....madness. #MayaAgain #airingsoon on @sonytvofficial," read the caption of her second post.

She captioned her third post as, "What do you see,darkness in her beauty or beauty in her darkness. #MayaAgain #airingsoon on @sonytvofficial"

On the work front, Jennifer, who finished shooting for her digital debut series Code M, will soon start shooting for Beyhadh 2. While the original series saw Jennifer in a never-seen-before avatar, where she played a character (of Maya Mehrotra) that had distinct shades of grey, in the new season the actress will show her darker side that will give you chill, I am sure. The new season will see Shiving Narang and Ashish Choudhary opposite Jennifer and we can't for the show to air already. Stay tuned!

(The above story first appeared on LatestLY on Oct 16, 2019 11:13 PM IST. For more news and updates on politics, world, sports, entertainment and lifestyle, log on to our website latestly.com).