Did Kartik Aaryan Replace Virat Kohli as the Face of Manyavar?

Kartik Aaryan was recently announced as the face of Manyavar, a brand that was synonymous with Virat Kohli for us. The Indian skipper's association with the men's ethnic wear brand goes back a long way and the actor's inclusion may upset some of the cricketer's fans. 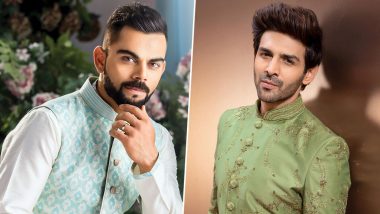 Kartik Aaryan as a brand is currently selling like hot cakes in the industry circuit. He's declared as the national crush of India and one of the most eligible bachelors in B-town. As the Pyaar ka Punchnama actors is enjoying his movie signing spree, his brand endorsements are equally gaining momentum. The actor was recently announced as the face of popular men's ethnic wear brand, Manyavar, something that we associated with Virat Kohli for a very long time. Kartik Aaryan Bags Another Project, Will Star in the Sequel of Akshay Kumar's Bhool Bhulaiyaa?

Kartik took to his Instagram account to share the recent update on the new deal he bagged with this ethnic wear brand.  The Dostana 2 actor captioned his latest Instagram post where he shared this exciting news with all his fans: "Manyavar Kartik Aaryan. Excited to reveal myself as the face of #Manyavar."

He's definitely ruling hearts, minds and markets these days and his golden days have just begun. Mr Kartik's journey from a nobody to somebody so influential is setting the right example and we couldn't be happier. Is Shravan Reddy a Virat Kohli Look Alike? ‘I Like When People Say I Look like Him,’ Confesses TV Actor.

Manyavar Kartik Aaryan 😉😁 Excited to reveal myself as the face of #Manyavar 🙏🏻 😊 #Repost @manyavarmohey The #LukaChuppi is over! Now revealing, fashion’s most wanted - ‘Manyavar’ Kartik Aaryan ! #ManyavarKartikAaryan

Meanwhile, we wonder if the actor has replaced Virat Kohli as the face of this popular brand. The Indian skipper was associated with Manyavar for a very long time. He was even responsible for prompting Anushka Sharma to lead its newly introduced women's section. Wonder if the ace batsman wasn't keen on renewing his contract or the management simply decided to hire a new face.

(The above story first appeared on LatestLY on Jul 03, 2019 11:35 AM IST. For more news and updates on politics, world, sports, entertainment and lifestyle, log on to our website latestly.com).