The Balaclava Knit Top pulled up from its bottom till the half of the face and a cut out near the mouth and it was priced at $890. 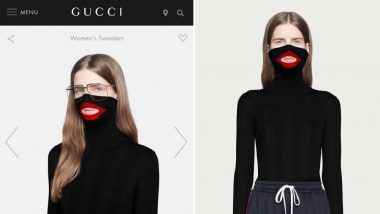 Italian luxury brand Gucci faced much backlash for selling a sweater that resembled blackface. The turtleneck top was removed from the company's website and posted an apology for the product. The Balaclava Knit Top pulled up from its bottom till the half of the face and a cut out near the mouth and it was priced at $890. It had a red lining around the lips. They said it was inspired by their vintage ski mask but in time for the Black History Month, social media users pointed out that it mimics blackface. Gucci Designs a Swimsuit For £290 Except it Cannot be Used for Swimming!

Gucci had introduced this sweater in their Fall Winter 2018 runway show. But users were not pleased with the overall appearance of the product. The photos have been removed from the Gucci website but can be still viewed on other retail stores. Twitter was not impressed at all. Check out some of the tweets that were written by the people about this 'blackface' sweater. ‘T-Shirt Shirt’ for Over Rs. 80 Thousand! Luxury Brand Balenciaga’s New Bizarre Fashion Idea Gets Trolled on Social Media.

Here are the Tweets:

It’s 2019, when are we going to stop using stereotypes etc as marketing tactics?

As a Marketer/advertisier, there is a team responsible for checking stuff like this. But the problem is: if no one sees a problem with it on the team. @gucci you’re dead wrong. https://t.co/6V9w8X6KPB

Luxury brands like Gucci know EXACTLY what they're doing when they create these offensive, racist designs. An apology means nothing. They shouldn't have to apologise because they shouldn't do it in the first place. It's that simple. pic.twitter.com/3vkQ9OPOQd

The backlash was too much and Gucci then apologised on their social media for their offensive product.

Gucci deeply apologizes for the offense caused by the wool balaclava jumper.

We consider diversity to be a fundamental value to be fully upheld, respected, and at the forefront of every decision we make.

Although the product is off the racks, it does give out a wrong message. This is not the first time a fashion brand has been accused of making such a mistake. Fashion brand Prada too in the past had to withdraw products after they made blackface imagery. Those products had monkey-like figures with black faces and red lips.

(The above story first appeared on LatestLY on Feb 07, 2019 06:29 PM IST. For more news and updates on politics, world, sports, entertainment and lifestyle, log on to our website latestly.com).