The actress wore a sexy red dress for her recent photoshoot. The outfit was a high slit, off-shoulder dress with a plunging neckline. She paired the look with subtle makeup. 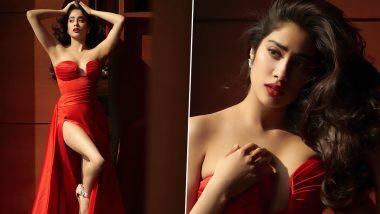 Janhvi Kapoor is uping her fashion game every now and then. During the promotion of her recently released film Roohi, the actress stunned us with her glamorous outfits as well. She is setting the bar high with every outing of her and serving us some major fashion goals every time. The actress' hot pink pantsuit, the shimmery dress had become the talk of the town but her latest photoshoot proves that this is just the beginning. Kapoor indulged in a photo session and she donned a new dress and managed to ooze glam with each pose. Janhvi Kapoor in her Red Dress Looks like a Work of Art on Cosmopolitan's New Magazine Cover.

The actress wore a sexy red dress for her recent photoshoot. The outfit was a high slit, off-shoulder dress with a plunging neckline. She paired the look with subtle makeup. She opted for red lipstick, bronze eyeshadow and a matt base. Her makeup was completed with some mascara, highlighter and tint. Janhvi added a pair of diamond earrings and a pair of heels. She let her hair down in curls and owned the poses she gave for the camera.

Apart from this, Janhvi's latest release, the horror-comedy titled Roohi, has made over ₹12.5 crores at the box office in four days. The film has had the most commercially successful opening ever since theatres were allowed to operate at full capacity recently, post the lockdown. During the lockdown, Janhvi starred in Gunjan Saxena: The Kargil Girl, which released on Netflix. Kapoor was applauded for her acting in the film and she managed to impress the critics with her performance as well. Janhvi Kapoor on Khushi Kapoor's TikTok Videos: My Team Sends Me her References and Asks Me to Be Active Like Her.

She also has Dostana 2 in her kitty. Talking about the film. Janhvi told Hindustan Times, "It has been fun. We shot for about 25 days. Over a year ago, actually, and I really enjoyed it. I am looking forward to getting back on set. It has been a good experience working with Kartik. As I said, it is a fun film, and he does humour and comedy extremely well." She is currently shooting for  Good Luck Jerry in Punjab and has Takht in the pipeline as well.

(The above story first appeared on LatestLY on Mar 16, 2021 10:57 AM IST. For more news and updates on politics, world, sports, entertainment and lifestyle, log on to our website latestly.com).