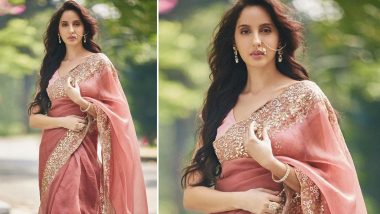 Nora Fatehi is better known as the Dilbar girl. While she has Bigg Boss 9 and Jhalak Dikhhla Jaa to her credits, it was only in 2018 for the Johan Abraham starrer Satyamev Jayate in that she created a furore by grooving on the recreated version of the song Dilbar which crossed 20 million views on YouTube in the first 24 hours of its release. There was no looking back as Nora clinched a slew of songs and a meaty role in the Remo D'Souza directed Street Dancer 3D. Blessed with a toned, lithe frame, lustrous long locks and striking features, Nora goes on to slay in any given style. While form-flattering ensembles with athleisure, laidback styles and non-fussy, easy dresses comprise her fashion arsenal, Nora swapped these for a heady saree vibe. Styled by Lakshmi Lehr of Style Cell and glam helmed by Marce Pedrozo, Nora took to flaunting a dull rose-toned saree worth Rs.79,000.

Here's a closer look at how Nora stirred up a saree storm. Bhuj: The Pride of India: Nora Fatehi Taken Onboard After Parineeti Chopra Opts Out of Abhishek Dudhaiya’s Film.

Nora draped a Devnaagri saree - a dull rose saree in organza base embellished and paired with a pale pink blouse. A nose ring, earrings, bangle and a statement ring. With her long hair styled in waves and subtle glam as the perfect accompaniment, Nora's never-before-seen saree vibe was sure a hoot! Nora Fatehi Celebrates Life-Changing 'Dilbar' Release While Giving Shout-Out to 'Outsiders' Who Have a Dream. 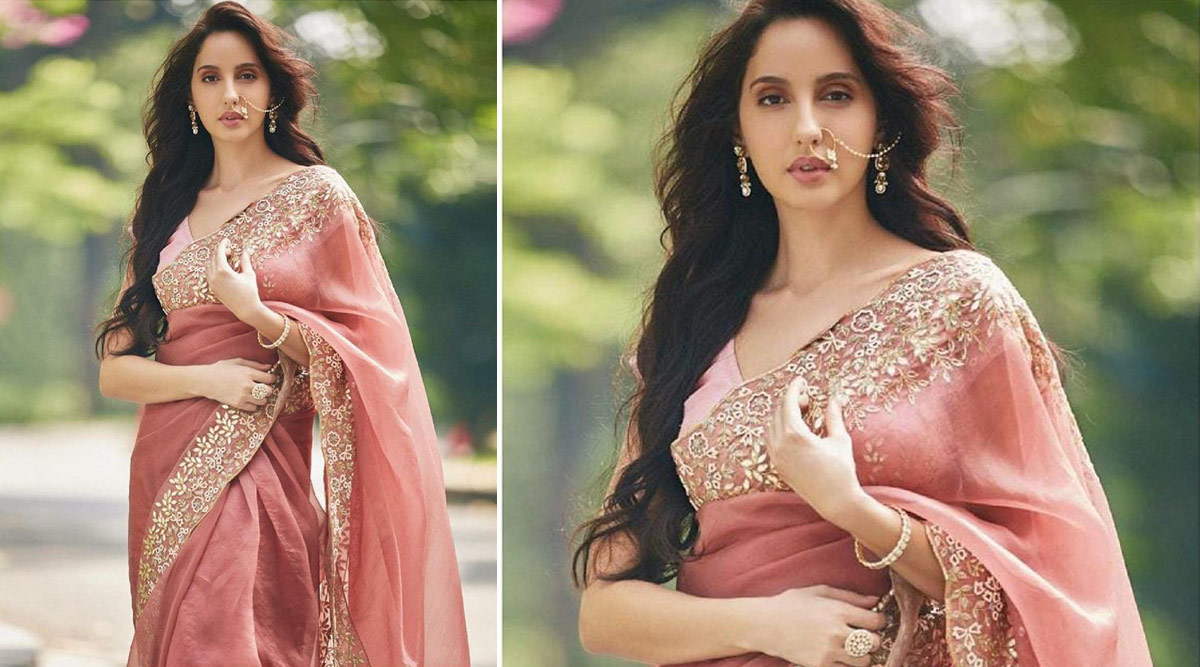 Nora was last seen in Street Dancer 3D that released earlier this year, sharing screen space with Varun Dhawan, Shraddha Kapoor, Prabhu Deva. She will be seen in Bhuj: The Pride of India featuring alongside Sanjay Dutt, Sonakshi Sinha, Sharad Kelkar, Ammy Virk and Pranitha Subhash. A biographical war action film directed, co-produced and written by Abhishek Dudhaiya set during the Indo-Pakistani War of 1971, it is about the life of IAF Squadron Leader Vijay Karnik, the then in-charge of the Bhuj airport who and his team reconstructed the IAF airbase with the help of 300 local women. The film will be released on the OTT platform, Disney + Hotstar.

(The above story first appeared on LatestLY on Jul 15, 2020 02:49 PM IST. For more news and updates on politics, world, sports, entertainment and lifestyle, log on to our website latestly.com).