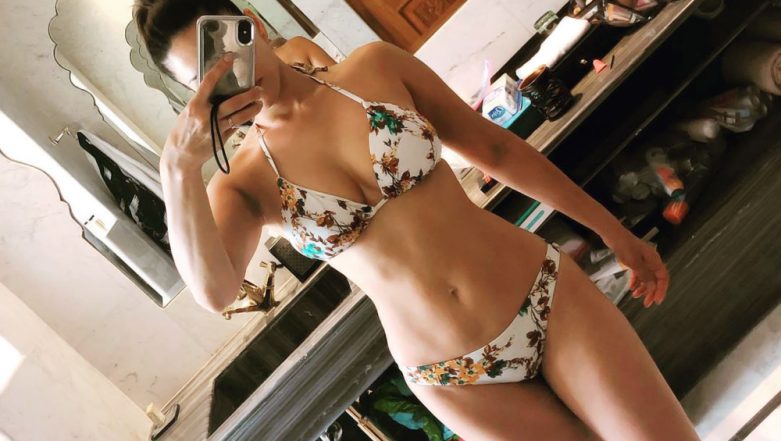 It looks like actress Sunny Leone is enjoying her summer pretty well. The actress recently took to Instagram to share a picture in her 'favorite bikini' as she's all set to beat the heat by dipping into the pool. Sunny is currently having a fun time at a private villa in Jaipur. The One Night Stand actress shared a picture on her social media where she's seen flaunting her perfect curves in a floral bikini. TikTok With Sunny Leone and Rannvijay Singha! MTV Splitsvilla 12 Squad Grooves With Actress’ Twins Noah-Asher (Watch Video)

Sunny wrote in the picture caption: “Pulled this bikini after a long time! Time for a swim in my private villa pool here in Jaipur! Gorgeous resort!” We have to say, Sunny looks absolutely gorgeous and is definitely giving us some summer fashion goals with her bikini.

Pulled this bikini after a long time! Time for a swim in a my private villa pool here in Jaipur! Gorgeous resort!

We recently saw Sunny raising the temperatures in the new commercial for Manforce’s new condom ad introducing cocktail flavour. The actress is seen in an extremely sensuous avatar in this commercial and we bet not just men even women were swooning looking at her oomph. Sunny Leone Is XXXTremely Bold in New Manforce Condom Ad! Sexy Actress Gives Us a Sneak-Peek Into Enjoying Cocktail Flavour Condoms (Watch Video)

On the work front, Sunny Leone has been cast in the remake of the popular Punjabi film, Jatt & Juliet. She will be starring opposite Manish Paul in this film. She is also set to make her Tamil debut soon with a period drama titled, Veeramadevi. Sunny will be seen in the role of a warrior in this film. It also stars Nassar and Srinath in supporting roles. While we wait to see her on the silver screen again, we bet this Instagram picture is sure to make your day!