Dhammachakra Pravartan Din 2022 Date in Maharashtra: From History to Significance, Here's Everything You Need To Know About the Buddhist Festival 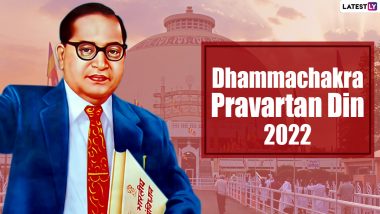 Every year, Dhammachakra Pravartan Din is observed on Ashoka Vijayadashami, which marks the day when Dr B.R. Ambedkar converted to Buddhism in 1956. People head towards Nagpur's Deekshabhoomi monument on Vijayadashami every year to commemorate the formal occasion that took place on October 14. While most Buddhists will celebrate Dhammachakra Pravartan Diwas 2022 on Vijayadashami, that is, on October 5, Wednesday, others will observe the significant day on October 14, Friday. October 2022 Holidays Calendar With Major Festivals & Events: Gandhi Jayanti, Dussehra, Diwali, Halloween; List of Important Dates and Indian Bank Holidays for the Tenth Month.

As mentioned, Dhammachakra Pravartan Din commemorates Dr Ambedkar's embracement of Buddhism after he renounced Hinduism on October 14, 1956. He travelled to Sri Lanka in 1950 to learn more about Buddhism and its beliefs. He attended the meeting of the World Fellowship of Buddhists, after which he became a devoted follower of Buddha. It was in 1956 when he completed his book, The Buddha and His Dhamma, after which he took the decision to convert to Buddhism. He organised a public ceremony at Deekshabhoomi, Nagpur and accepted the monk's Three Refuges and Five Precepts to embrace Buddhism for himself and his wife. Along with him were his 6,00,000 followers who also converted to Buddhism at the sacred monument of Nagpur.

Every year, people belonging to the Buddhist community and B.R. Ambedkar's followers mark the momentous day by gathering at the Deekshabhoomi monument. They pay tribute to Lord Buddha and Dr Ambedkar, whose teachings have inspired many to date. Buddha's preaching is also spread to enlighten people about the values and beliefs he upholds. Several cultural events are also organised to mark the important day of Dhammachakra Pravartan Din.

(The above story first appeared on LatestLY on Sep 28, 2022 04:22 PM IST. For more news and updates on politics, world, sports, entertainment and lifestyle, log on to our website latestly.com).