Did You Know Thai Pongal Is Celebrated like Thanksgiving in Virginia? Know More About Pongal Day in the US 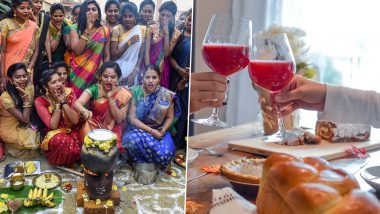 Did you know that Thai Pongal is celebrated just like Thanksgiving in the US? It is also known as Pongal Day? While Thanksgiving and Thai Pongal is known to have a lot of similarities, Pongal had mainly remained the harvest festival of Southern-India, primarily. However, after 2018 when Thai Pongal was recognised by the US state, January 14 is celebrated as Pongal Day. The front-line organization, Hindu America Foundation (HAF), initiated and nurtured by professional Indian Americans in the United States has formed roots in many eastern states in the United States. Happy Thai Pongal 2021 Wishes & Greetings: WhatsApp Stickers, Photo Messages, GIF Images, Status, SMS, Quotes and Wallpapers to Send to Family & Friends.

The legislative committee believes that the Indian American community makes many important contributions to "economic growth in the Commonwealth" and with highly educated professionals and entrepreneurs who "work in a variety of fields, open new businesses, and create jobs, all the while continuing to observe and celebrate their rich cultural heritage" and that "Pongal Day brings together members of the Indian American community as they celebrate with gatherings, decorations, and special foods" therefore the House of Delegates decided that January 14, in 2018 and each succeeding year will be observed as Pongal Day in Virginia. The designation of this day also finds its place on the General Assembly’s website.

Similarities Between Thai Pongal and Thanksgiving

Virginia's Legislative Information System the HOUSE JOINT RESOLUTION NO. 573 titled Designating January 14, in 2018 and in each succeeding year, as Pongal Day in Virginia notes that "similar to Thanksgiving Day in the United States, Pongal is a festival of thanksgiving to mother nature, the earth, farm animals, and the sun in the form of Lord Suryan for the resources necessary for a bountiful yield of crops".  Thanksgiving, as the name suggests, celebrates gratitude whereas Pongal, the 4-day-Indian-festival also thanks Sun god and other elements of nature for providing food and energy on Earth to sustain our survival.

The resolution further describes Pongal as a four-day festival that typically begins on January 14 and ends on January 17. It notes that "the festival is exemplified by the phrase in the Tamil language Thai Pirandhaal Vazhi Pirakkum, meaning the beginning of the Thai month will open avenues for a better life"

"This will provide Tamils of Virginia an opportunity to celebrate and share our rich heritage, culture, language and history. Mr Bulova explained in the General Assembly that Pongal is similar to Thanksgiving Day. Committee members in both the House and Senate were deeply moved and inspired by our Tamil Heritage and the resolution was approved unanimously. The Tamil community is deeply indebted to him," had said A. Sriskandarajah, legal advisor to the Valluvan Tamil Academy (VTA) and part of the team that worked to make this possible to the Guardian.

(The above story first appeared on LatestLY on Jan 14, 2021 03:37 PM IST. For more news and updates on politics, world, sports, entertainment and lifestyle, log on to our website latestly.com).