Ganesh Chaturthi 2018 Modak Recipes: 5 Traditional Dishes You Can Prepare at Home for this Ganpati Festival

According to traditional beliefs, Lord Ganesha is known as ‘Modakpriya’ as ‘Modak’ is his favourite food. 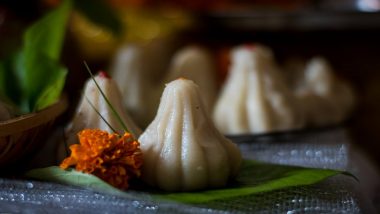 The festival of the elephant-headed God is in the offing and the preparations have begun in full swing. While many begin the preparations a month before, the excitement reaches to new heights as the day nears to celebrate Ganesh Chaturthi. In 2018, the festival will begin on September 13 and will go on for the next 10 days. The celebrations include huge pandal set ups, people singing celebratory songs on welcoming the idol, extravagant decorations and special food is prepared for the festivities. No Indian festival is complete without food especially traditional sweets. ‘Modak’ is the most popular sweet dish prepared on Ganpati as it is believed to be the Lord’s favourite dessert. Ganesh Chaturthi 2018 Date: Significance, History, Importance, Rituals & Why is the Festival of Ganpati Celebrated for 10 Days.

According to traditional beliefs, Lord Ganesha is known as ‘Modakpriya’ as ‘Modak’ is his favourite food. Sweet shops during the festival is filled with a dozen of different varieties of modaks. From traditional steamed modaks to fried and chocolate-flavoured modaks, there is a plethora of options available in the market. But what better than preparing your favourite Lord Ganpati’s sweet at home. We bring to you four different traditional modak recipes you can prepare at home to add a personal touch for the festival. Ganesh Chaturthi 2018 Makhar Decoration Ideas: Flower Decorations to Eco-Friendly Themes for This Year's Ganpati Festival.

When preparing any dish, the most important thing is the taste. But when preparing modaks, after you get the right flavour, the second most important thing is the shape of the modak which the trickiest part. Now if you are a newbie in preparing the modaks then your best bet is to get a mould from the market that will give you the desired shape and will make it look like just how you get it in the market. But if you want to make it with your own hands, then practice before hand before you make your final batch as bhog or prasad for Lord Ganesha. We hope that these recipes will make for a delicious sweet to savour during the Ganpati festival. Happy Ganesh Chaturthi!

(The above story first appeared on LatestLY on Sep 06, 2018 09:56 AM IST. For more news and updates on politics, world, sports, entertainment and lifestyle, log on to our website latestly.com).