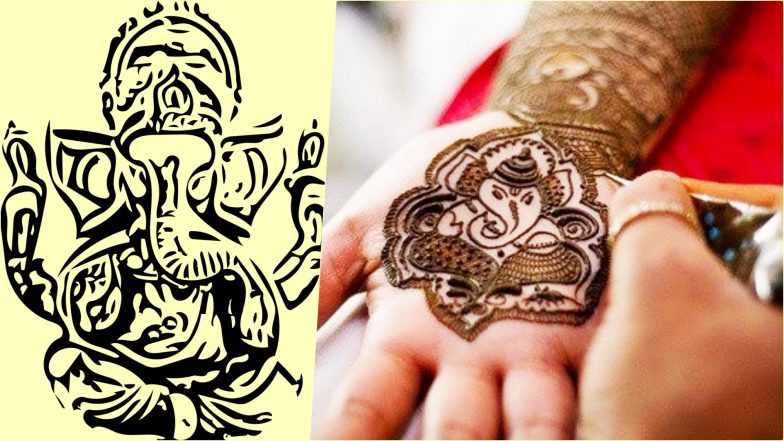 After Janmashtami, India gears up to celebrate Ganesh Chaturthi with joy and fervour. Ganesh Chaturthi marks the birthday of Lord Ganesha, one of the most worshipped and beloved deities in Hinduism. And to celebrate this vibrant festival, we are bringing you a collection of Ganesh Chaturthi 2019 special mehndi designs. Why mehndi? Well, this ancient body art form has become an integral part of Indian festivals. Festivities and celebrations are incomplete without the application of mehndi on hands and feet. It is considered highly auspicious. And moreover, applying mehndi is so much fun. Happy Ganesh Chaturthi 2019 Wishes: WhatsApp Stickers, GIF Image Messages, Ganpati Bappa Morya Greetings, SMS, Festive Status, Quotes, DPs to Send During Ganeshotsav.

Bearing an elephant head with a long trunk, a set of tusk, a pair of huge ears, dreamy eyes, four hands and a big pot belly, Ganesha also known as Ganpati is one of the most adorable gods in the Hindu pantheon. His appearance makes him easily identifiable. This is why girls and women of all ages love to draw Ganpati face with mehndi/henna on their palms. There are so many different types of mehndi designs such as Indian mehndi design, Arabic mehndi design, Moroccan mehndi art, Rajasthani mehndi pattern, Kolkata mehndi design, Marathi mehndi designs and more. Mehndi artists incorporate Ganesh Chaturthi festival elements in these types to give it a new twist for the occasion. Easy Ganpati Makhar Decorations for Ganesh Chaturthi 2019: How to Decorate Makhar & Singhasan in Simple and Beautiful Way for Ganeshotsav (Watch Videos).

In this article, we will look at few mehndi designs that are apt for Ganesh Chaturthi celebrations. As this festival is extensively celebrated in the state of Maharashtra, it makes sense to look at Marathi mehndi design in detail. One of the most traditional and authentic patterns is Marathi Zari Work Mehndi Design. It includes embroidered borders, jaali and dotted small windows. At the centre of the palm, one can make the face of Lord Ganesha. Full arm design, Raja-Rani mehndi design are more suitable for wedding rituals but can be improvised for festivals such as Ganesh Chaturthi.

How to Draw Ganesha Mehndi Design for Beginners

One of the simplest ways to draw Ganesh Chaturthi unique mehndi design is by drawing Ganesha from the word “Om”. Lord Ganesha is identified with the Hindu mantra Om, also spelt Aum. You can learn this artwork by practising it with pen and paper. Once you feel confident, recreate it with mehndi/henna on your palm. It’s that simple.

How to Draw Ganpati From Om?

As you can see, these Ganesh mehndi designs are of all kinds. If you are into intricate details, you have samples of gorgeous full hand mehndi designs. Otherwise, you can also go for simple miniature Ganpati mehndi patterns for palms. Some designs are so simple that you can draw them using a mehndi cone at home all by yourself. Yes, you do not need any assistance in drawing side faced Ganpati mehndi designs. On that note, we wish everyone a very Happy Ganesh Chaturthi 2019. May all your wishes and dreams be fulfilled by Vighnaharta Ganesh.