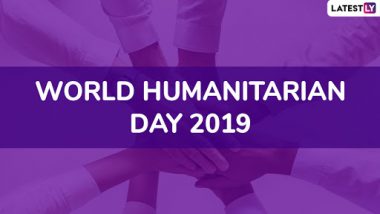 According to the details, this day has been marked to dedicate the sacrifice of then Special Representative of the Secretary-General to Iraq, Sérgio Vieira de Mello and 21 of his colleagues who were killed in the bombing of the UN Headquarters in Baghdad. Rabindranath Tagore Jayanti: Quotes by the Universal Voice and Cultural Icon on His 158th Birth Anniversary

World Humanitarian Day was commemorated for the first time on August 19, 2009. Apart from honouring the male humanitarian workers, the United Nations is also dedicating this day for women who work in crises throughout the world. The main focus is to tell the story of unsung heroes, who have long been working on the front lines in their own communities in some of the most difficult terrains.

Here are some of the Humanitarian quotes by great people.

1: Mother Teresa, founder of The Missionaries of Charity:

If you can’t feed a hundred people, feed just one.

Whatever you do will be insignificant, but it is very important that you do it.

Life’s most persistent and urgent question is, ‘What are you doing for others?'

4: Norman Borlaug, father of the Green Revolution and credited with saving over one billion people from starvation:

The destiny of world civilization depends upon providing a decent standard of living for all mankind.

When we live in a world that is very unjust, you have to be a dissident.

To say that on a daily basis you can make a difference, well, you can. One act of kindness a day can do it.

Everyone needs to be valued. Everyone has the potential to give something back.

For to be free is not merely to cast off one's chains, but to live in a way that respects and enhances the freedom of others.

Apart from dedicating this day, the United Nations is propagating the idea of supporting people in crisis. Women Humanitarians hold a sense of unparalleled uniqueness, one that adds to the global momentum of female strength, power and perseverance. It is time to honour the women who have acted as first responders to the darkest hours of crisis.

(The above story first appeared on LatestLY on Aug 19, 2019 08:55 AM IST. For more news and updates on politics, world, sports, entertainment and lifestyle, log on to our website latestly.com).