World Rivers Day 2020: Interesting Facts About Rivers Around The World That You May Not Know 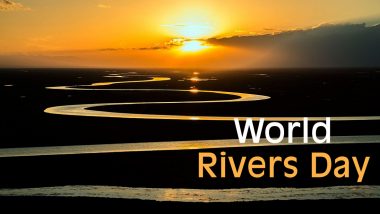 It's the World Rivers Day today. Observed every year on the fourth Sunday of September, it aims to create an awareness about this water source and the numerous dangers they face in the oncoming years. It is a day that highlights the need to protect our rivers and drive initiatives that work in betterment of these water streams. We all learnt a little about rivers and their formation in our school days but there is so much more to these water streams. On this World Rivers Day 2020, we tell you interesting facts about the rivers, some of which you may not have known. Nile River Valley at Night Looks Stunning From Space! See Pictures of ‘The Father of African Rivers’.

We are sure you would not know some of these amazing facts about the rivers around the world. You can share these facts with everyone today and give out the message of why we need to work in protection of these water streams.

(The above story first appeared on LatestLY on Sep 27, 2020 08:05 AM IST. For more news and updates on politics, world, sports, entertainment and lifestyle, log on to our website latestly.com).