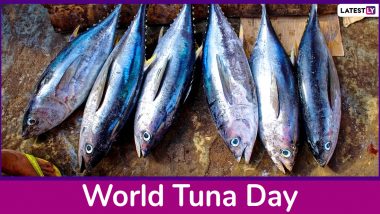 Tuna - it's known for the multipurpose use and benefits of not just being a delicious and easy to cook meat but also a favourite ingredient in cat treats. However, this popularity of the meat has led to increased demand, making it an endangered species. World Tuna Day is observed on May 2 every year to increase awareness about these issues. In December 2016, the UN voted in favour of officially observing this day and it continues to be a crucial commemoration to raise awareness on this problem. Japan’s Sushi Tycoon Kiyoshi Kimura Pays Record $3.1 Million for an Endangered Bluefin Tuna at Tokyo Fish Auction.

When is World Tuna Day celebrated?

World Tuna Day is commemorated on May 2 every year since 2016. World Tuna Day 2020 marks the 4th official observance of this day.

The main reason behind the celebration of World Tuna Day is to raise awareness about the increased demand for tuna, and the effects that it has on our environment. Tuna fishes are not only a great source of food for people but are also very important economically. There are around 40 species of tuna found in the Atlantic, Indian, Pacific oceans and the Mediterranean sea. Tuna meat has nutritional properties including the omega 3, minerals, Proteins and Vitamin B12. Having such nutritional value has a huge impact on demand. Around 7 million tuna or tuna species are caught per year, accounting for 20% of the entire marine captures and 8% of all globally traded seafood. World Tuna Day celebrations are important to make the world realize the role of these fishes for environmental sustainability as well as balancing the economic impacts it may have on the livelihoods of many. Frozen Fish Comes Back to Life in Warm Water! (Watch Video).

How is World Tuna Day celebrated?

This day is marked by raising awareness on alternative replacements to tuna, that can help those in most needs of this highly nutritious meat get access to it. Too much of anything is harmful, and on World Tuna Day it is crucial for people to realise just how this increased and borderline insatiable love for tuna can impact marine life and lead to an imbalance. World Tuna Day celebrations also feature special conventions and conferences that speak about the impact of tuna consumption, the positive, negative and replacement options that people need to consider and the implications of ignoring these signs.

There is a fix for this problem which mainly lies in sustainable Tuna fishing. And this solution is brought back to the table and discussed heavily by key decision-makers in the marine industry, environmental activists and members of the UN on this day. Here's wishing you all a very Happy Tuna Day.

(The above story first appeared on LatestLY on May 02, 2020 09:54 AM IST. For more news and updates on politics, world, sports, entertainment and lifestyle, log on to our website latestly.com).