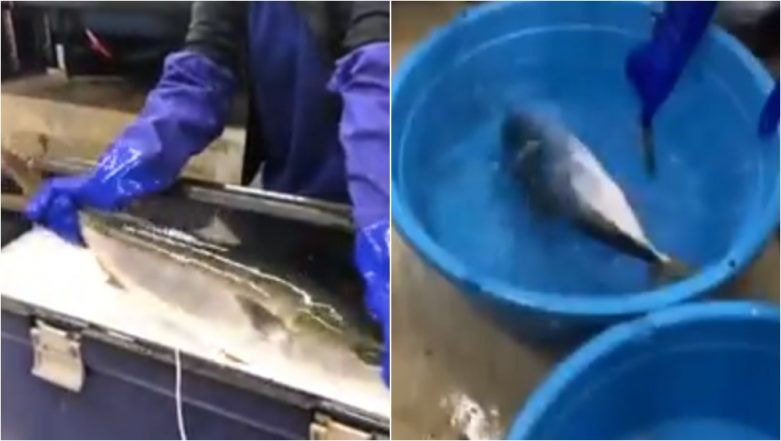 Frozen fish coming to life has often perplexed people on social media. Here is yet another video of a splashing in water after being transferred in a hot water tub. The video shot in a market in Japan shows a man placing the fish in a tub of crushed ice. They pan the camera to show that the temperature inside the tub is -2.10C.

After ensuring it is frozen, he then lets other men transfer it to a hot water tub. Seconds after being immersed in hot water, the fish starts splashing its fins to the surprise of viewers. Videos of frozen fish coming to life have gone viral multiple times in the past. According to a Daily Mail report, an expert from the National Marine Aquarium said that the fish is 'most likely a species related to a tuna'. 6000 Endangered Fish Dies in China Due to Construction of Bridge; Work Halted.

The fish was not fully frozen, but left in ice for some time.  Fish can generally survive this temperature as they contain 'antifreeze' proteins in their blood. The video went viral after it was shared on Pro Fishing Video's Facebook page on Wednesday.  It was shared on social media with the caption, "Japan technology, Freezing a newly caught fish, and then putting them back alive. Freshness best."

Social media users are trying to decipher the video clip to how the fish survived the cold temperature. Some also suggested that the video is fake while other called it animal cruelty. However, this is one of the ways in which fish is kept fresh in Japan.

It has garnered over 74,000 views as continues to engage people on Facebook. One of the comments read," I've done this with spot prawns, flew them from Alaska to Vancouver. They are not frozen, but chilled into a dormant state with 100 % oxygen/slush ice mix."