In this modern era, one cannot just sit in their room thinking someday they will achieve their goals effortlessly. Nowadays, the market is full of youngsters with great startup ideas, and one can never know from where and when the next Unicorn Founder may emerge. 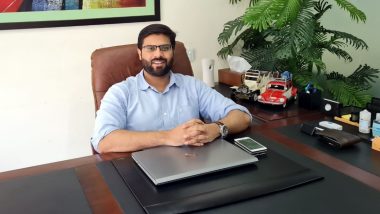 In this modern era, one cannot just sit in their room thinking someday they will achieve their goals effortlessly. Nowadays, the market is full of youngsters with great startup ideas, and one can never know from where and when the next Unicorn Founder may emerge. However, some of the talented teenagers do not even continue with their ideas because of their procrastination and doubt. Nevertheless, it is never too late to start working towards your startup idea. Today, in our series of amazing Founders’ stories, we’ll talk about the Founder of an EdTech helping thousands of students around the Globe: Aamir Azam, 31 years old, Founder of My Tutor Source (MTS). His impressive journey does not start with all glitters and sparkles; it was filled with hard work and determination. This is a journey of a small startup that was started from $850 later, skyrocketing to an estimated $30 Million valuation in 4 years.

During our interview with Aamir, he told us how from a young age, his interests were diverted towards the education sector and the whole edtech market. To continue with his interest in the education sector, he chose software engineering as his vocation and worked as an Oracle Peoplesoft Consultant Campus Solutions and CRM in the United Arab Emirates (UAE) for more than three years. Later, as a solution architecture designer, he designed systems for various mainstream universities across the Globe. While working in the UAE, Aamir pointed out how he started noticing the wide demand for qualified and experienced tutors, mostly for private and online teaching sessions. However, this market of online teachers was vastly untapped and full of loopholes due to the rarity of qualified teachers and exceptionally higher tutoring rates.

In the previous and ongoing year, the global EdTech market size has reached up to USD 106.04 billion in 2021 and is estimated to reach up to USD 400 billion in the coming five years. During the recent times of Covid-19, the students globally are majorly taking help from Edtech platforms to fulfill the gaps left by not sitting in a physical classroom. Hence, some of the major EdTechs like BYJU’s, Khan Academy and Udemy are growing at an exponential rate. The importance of the education sector and its growth are highlighted by the fact that Barack Obama, in a conference with the CEO of Facebook, Mark Zuckerberg, pointed out that the education industry will be one of the three fastest growing industries in the near future.

Aamir mentioned how the central idea behind My Tutor Source (MTS) came through his cousin who was residing in the UAE and looking for a Mathematics tutor. When he helped his cousin, he realized how many students out there need help to score good grades. After analyzing the market situation and with the experience he had acquired as a consultant in the education field, he started working on the idea to build an edtech platform that would help students all around the world. However, he started it largely with the aim of helping students in the United Arab Emirates (UAE). His idea to create an innovative EdTech startup, along with his hard work and support from friends and family, launched his entrepreneurial venture, “My Tutor Source (MTS)” in December 2016 with $850 as the initial investment. Within just three (3) months into the launch, MTS had 150 new sign ups from students within Dubai.

Starting with just a few teachers, today, MTS’s Teachers’ database has more than 3000 tutors with thousands of students signed up for online private classes. However, MTS has had to overcome certain challenges and changes during this time period. For instance, in 2018, Skype was banned by UAE, making it a huge problem for online private tutors and students. Considering the new public policies, MTS decided to use the latest custom build technology to support the students and to keep providing them with the best private online tuitions. MTS was built with the vision to deliver high quality education available through the best tutors available using the latest technologies. In our interview MTS’s CEO, Aamir Azam stated:

“The need of a single student motivated this venture. Hence, MTS focuses on the needs and issues of students, and motivates communication firsthand. Our aim is to provide students with what they require to aid their studies, without taking away their autonomy and individuality.”

In the middle of 2019, MTS expanded its services to various regions, including The Middle East, Hong Kong and the United Kingdom (UK). However, in late 2019, when the COVID-19 hit the world, pausing the whole world, it slowed down the economic growth of several private sectors. Every sector faced financial problems; eventually, people started losing their jobs. In the midst of all this, MTS hired tutors from all over the world who lost their jobs due to the pandemic. Everything went online, and My Tutor Source (MTS) ’s audience started increasing, growing it massively in late 2019 and 2020, with an annual rise of 250-300% in the number of users. Students from the top ranking schools in the UAE, International School of Choueifat, GEMS International School, Dubai College and Jumeirah College, etc, are taking private tuitions from MTS, making it a household name in the region. During the pandemic, when so many people faced financial problems, MTS started offering financial aid to students so that they do not lose access to education in these testing times.

The startup is now worth approximately $30 million, with customers in the Middle East, Hong Kong and the United Kingdom. The company’s present objective is to expand into the American, and Australian markets and launch their digital application for smartphones. MTS’s approach has helped to bridge the gap between students and instructors and continues to do so. Living through the pandemic, the world is confined within their houses, making it difficult for students to voice their concerns and confusions.  With regards to the global issues that students face, efforts of privileged and capable individuals can truly help students and the education sector as a whole. These times require motivating and sensitive teachers, who are ready to help and guide students through the difficulty that comes with studying largely on their own.